The embattled leader of the Indigenous People of Biafra (IPOB), Nnamdi Kanu, has been seen praying by a wall in Jerusalem.

Mr. Kanu is seen leaning and praying at a location that looks like the Wailing Wall in the Old City of Jerusalem.

However, in a separate photograph also circulating online, the separatist leader is seen surrounded by persons suspected to be his supporters at the prayer site.

In a tweet confirmed by Radio Biafra and signed by Uche Mefor, IPOB’s deputy leader indicated Mr. Kanu would be shown live on Facebook praying in Jerusalem.

The tweet read, “The Supreme Leader of the Indigenous People of #Biafra (IPOB), Mazi Nnamdi Kanu would within an hour from now praying in Jerusalem Live on Facebook. All are enjoined to hook on. Chukwu Okike is in charge.”

Shortly after the attack, IPOB’s media and publicity secretary, Emma Powerful, issued a statement indicating five persons were killed and many others injured by the military.

Later in February, his wife Mrs. Uchehi lambasted the Federal Government and asked that it should produce her husband or tell the family his whereabouts.

The military denied knowledge of Mr. Kanu’s whereabouts and insisted the separatist leader was in hiding.

It would be recalled the IPOB leader was arrested in October 2015 for demanding the secession of Biafra from Nigeria and was later granted bail in April 2017.

After he was granted bail, Mr. Kanu went about the South-east and South-south regions organising protests which resulted in a crackdown by the government. 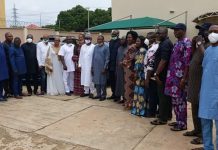 George Floyd: Videos Of Police Brutality During Protests Shock US