Home News Headline News June 12: Recognition of MKO as Past President, Says Osoba, as Past... 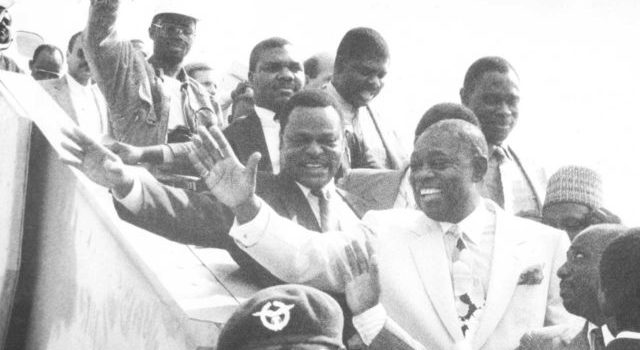 Former Governor of Ogun State, Olusegun Osoba, has said that the recognition of June 12 as National Democracy Day by President Muhammad Buhari was an indirect recognition of MKO Abiola as a past president of Nigeria.

Osoba made his views known during the Democracy Day celebrations in Abuja on Wednesday even as former presidents kept away from events to mark the day.

According to him, the Day was significant as past leaders from 1999 had refused to recognise the day or Abiola’s sacrifices for Nigeria’s democracy.

Osoba, insisted that the late MKO Abiola, who refused to surrender his mandate, suffered and died in the struggle for democracy for the country.

“I have a lot of very bad memories about June 12, as a lot of people lost their lives for the struggle, a lot of families also suffered incurable damages, also a lot of people sold their properties to survive.

“I also suffered in the hands of Sergeant Rogers, who made two attempts to kill me and I was in hiding for almost a year, along others who paid the price.

“I also recall that when I was a governor with a former president from my state and all efforts that we should do something to immortalise Abiola did not make any impact.

“You can, therefore, see why we are grateful to President Muhammad Buhari who recognises the significance of June 12.

“The significance is the full price paid by Abiola that is making us enjoy democracy that is 20 year old now.

“One of my own benefited from MKO Abiola’s sacrifice to become president, but here is Buhari who indirectly accepted that Abiola was once past president of this country, so those sacrifices that we also suffered are no more in vain,” he said.

Meanwhile, none of the former heads of state and presidents attended the Democracy Day celebrations at Eagle Square.

African leaders on the other hand, were well represented at the event.