Substitute Maxi Gomez scored in injury time to give Uruguay a barely deserved 2-1 win over Chile on Thursday.
The win did get the home side off to a victorious start in their opening World Cup qualifying match for Qatar 2022.

Uruguay took the lead six minutes before half-time when Luis Suarez scored a penalty kick, awarded after handball and with the aid of the video assistant referee (VAR).

Alexis Sanchez got the equaliser for Chile 10 minutes into the second half when he took a neat pass from Charles Aranguiz and slid an angled shot into the net with his right foot.

With the South American qualifiers twice pushed back from the scheduled start in March, it was almost a year since either team had played a full international.

Both sides tired as the game looked like petering out at a fan-free Centenario stadium in Montevideo.

However Gomez, who had only been on the field five minutes, would have none of that as he gathered a clearance on the edge of the box two minutes into stoppage time.

He rifled a shot low into the net to give the two-times world champions a winning start to their campaign.

The top four teams in South America’s 10-team group qualify automatically for Qatar 2022 and the fifth-placed side goes into an inter-regional playoff.

Uruguay’s next game is away at Ecuador on Tuesday, while Chile return to Santiago to face Colombia the same day.

In the evening’s earlier game, Peru and Paraguay drew 2-2 in a match that came alive with four goals in the second half.

Andre Carrillo put Peru in front after 53 minutes, only for the home side to snatch the lead with a double from Angel Romero.

However, Carrillo was not to be outdone and grabbed an equalizer with five minutes remaining. 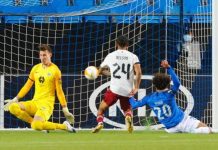 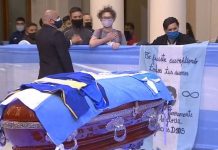