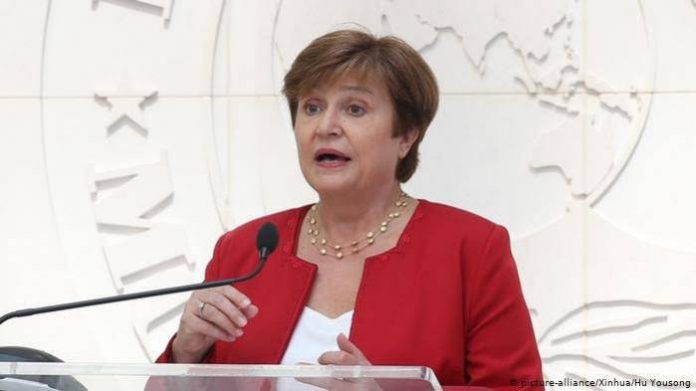 The new managing director of the International Monetary Fund, IMF, Kristalina Georgieva has warned of an economic slowdown in 2019 in 90 per cent of the world.

She gave the warning during her first speech at the helm of the multilateral organisation.

“In 2019, we expect slower growth in nearly 90 per cent of the world. The global economy is now in a synchronized slowdown,” Georgieva said at the IMF headquarters on Tuesday, Efe news reported.

“This widespread deceleration means that growth this year will fall to its lowest rate since the beginning of the decade,” the Bulgarian economist, who takes over from Christine Lagarde explained.

Georgieva made this assessment one week ahead of the joint Annual Meeting between the IMF and World Bank, WB, in which both institutions will present their economic projections in a gathering of top central bankers and economy ministers.

The IMF chief warned that the World Economic Outlook for 2019 and 2020 reflects a complex situation compared to the previous figures presented in July in Chile.

In her analysis, Georgieva argued that economic activity is softening in advanced economies, such as the US, Japan and, especially, the eurozone, while in other emerging markets, such as India and Brazil, the slowdown is even more pronounced this year.

China’s accelerated growth is experiencing a gradual decrease, she added.

“The precarious outlook presents challenges for countries already facing difficulties – including some of the Fund’s program countries.”

However, she said that about 40 emerging markets and developing economies, including 19 in sub-Saharan Africa, will have real GDP growth rates above 5 per cent.

Georgieva blamed trade disputes, such as the commercial war between Washington and Beijing, for global economic sluggishness, in addition to geopolitical tensions, such as Brexit, that have sparked uncertainty.

“Global trade growth has come to a near standstill,” she warned.

“Even if growth picks-up in 2020, the current rifts could lead to changes that last a generation – broken supply chains, siloed trade sectors, a ‘digital Berlin Wall’ that forces countries to choose between technology systems,” the IMF head added.

The economist said the main goal should now be to fix the fractures that have emerged and called for a coordinated global response.

“I believe we can do it. How? Start by unleashing the growth generating capacity of trade,” she said.

“We need to work together, now, and find a lasting solution on trade,” Georgieva added.