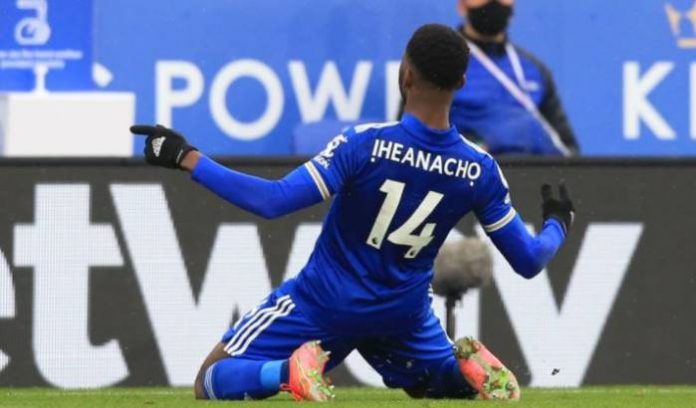 Leicester City’s Kelechi Iheanacho scored two goals as they beat Manchester United 3-1 in their FA Cup quarter-final on Sunday to set up a last-four clash against Southampton.

The Foxes took the lead following a horrendous error from Manchester United’s Fred, whose backpass became a through-ball for Iheanacho.

The Nigerian collected it and rounded the goalkeeper before firing home in the 24th minute.

But they never got to grips with Leicester City in midfield and they went behind again early in the second half.

Youri Tielemans surged at Manchester United’s soft centre, bursting through and brushing off a less-than-convincing challenge from Fred before firing a low shot into the bottom corner.

Jamie Vardy could have brought his seven-game goal drought to an end but he pulled his shot just wide of the near post when clean through on goal.

His selfless running, however, was instrumental in creating space for his Leicester City teammates.

Manchester United’s woeful defence was exposed again in the 78th minute as Iheanacho was left completely unmarked at the far post.

He headed home Marc Albrighton’s free-kick to seal the victory and send his side into the semi-finals.

“We worked really well in training to get ready for this game. Tactically we worked hard.

“We really felt ready to go and we passed the ball very well and got in open spaces and got the runs and the goals,” Iheanacho told reporters.

“I am really happy playing alongside Jamie (Vardy). It’s helping me a lot, creating space and getting the shot in behind. So, I hope we can keep working hard together,” he added.

Chelsea will take on Manchester City in the other last-four tie, and both semi-finals will take place at Wembley on the weekend of April 17 to April 18.(Reuters/NAN)