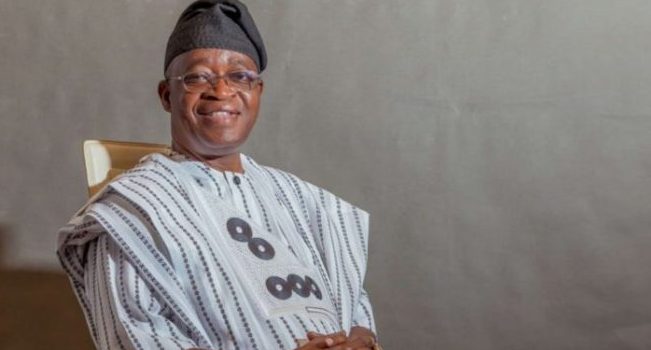 Gov. Gboyega Oyetola of Osun, on Friday said his victory at the Supreme Court is a call to service.

He dedicated the victory to God and the people of the state whom he said joined him “in navigating the twists and turns of the road to justice.”

Oyetola said this in a statement issued by his Chief Press Secretary, Mr. Adeniyi Adesina in Osogbo on Friday

The statement read: “It is indeed a challenge to us all to muster the courage and strength to do more.

“We will work even harder to deliver on our campaign promises to you and to take the State of Osun to the Next Level.

“I commend the Judiciary for a renewed hope and for proving to us that it remains the last hope of the common man.

“This is a victory for democracy, victory for good governance and victory for the masses as this verdict reaffirmed my victory in the governorship election.

“We will continue to see the mandate freely and willingly given to us by our people as an opportunity to serve and lift our state to greater heights.”

Recall that the Supreme Court on Friday in a split judgment of five to two upheld the election of Oyetola as governor of Osun.

He noted that with the Supreme Court decision, litigation over the September 2018 election was over, calling on the people to join hands with him to develop the state irrespective of party affiliation.

Oyetola also thanked party faithful, friends of the administration and all lovers of justice for their prayers, goodwill, and support throughout the journey.