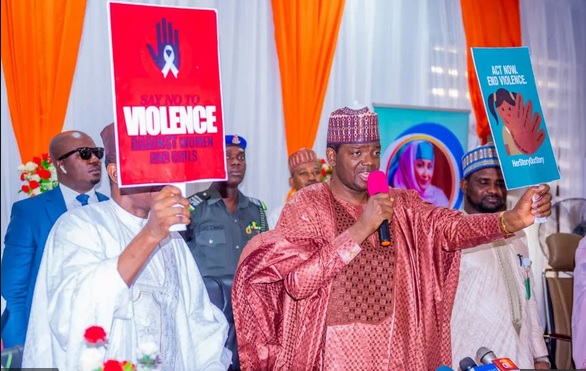 Gov. Bello Matawalle of Zamfara on Tuesday led a walk against rape and other acts of Gender-Based Violence (GBV) in the state.

The News Agency of Nigeria (NAN) reports that the event was part of the 16 days of activitism against GBV organised by the office of the First Lady, Hajiya Aisha Matawalle.

Matawalle said that the walk was to demonstrate his administration’s commitment to the fight against GBV.

According to him, his administration will not take it lightly with rapists and perpetrators of other acts of GBV.

He added that “we will not allow the bad among citizens to continue to destroy the future of our children.

“We are working with the state house of assembly to enact laws that will ensure stiffer punishment against rapists and violators of human rights”, the governor said.

Matawalle, who trekked from Bello Bara’u Round About to Government House, Gusau, was accompanied by his Deputy, Mahadi Aliyu-Gusau, commissioners, special advisers and other top government functionaries in the state.

Hajiya Zainab Gummi, the Commissioner for Women, Children and Social Development, who represented the first lady at the event, commended the governor “for his concern to the future of women, children and vulnerable groups in the state.

“This is an indication that the present administration is concerned about challenges faced by vulnerable groups.

“As we all know, majority of victims of rape and GBV are women and children who are our primary responsibility.

“We are appealing for support from stakeholders in the fight against GBV and other vices”, the first lady said.

Bello also called on parents and guardians to ensure close monitoring of their children and assured the emirate’s support and cooperation to achieve the set objectives of the campaign.