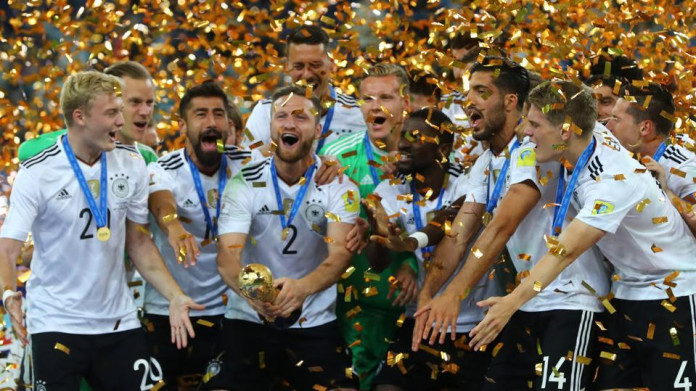 Reigning world champions and four-time World Cup winners, Germany, won the FIFA Confederations Cup for the first time on Sunday, after beating Chile 1-0 in the final.

The News Agency of Nigeria (NAN) reports that the Germans thus became the second team to win both the World Cup and European Championship, after France did it in 2001.

In this 2017 competition final match at the Saint Petersburg Stadium and before a crowd of 57,268, the Germans took so much battering, but still held on to win.

In this rematch of their Group B clash in Kazan which ended 1-1, the young German side were for close to 20 minutes in their own half of the pitch.

Chile bombarded them with waves and waves of attacks, with Alexis Sanchez and Eduardo Vargas drawing saves from goalkeeper Marc-Andre ter Stergen.

But a slip by the Chilean defence line resulted in Timo Werner working his way in to face Claudio Bravo.

Quick thinking by the tournament best scorer saw him sliding a pass to the right for Lars Stindl who simply had to tap in to score in the 20th minute goal.

Thereafter, it was Chile again and again with the possession, and attacking from all fronts, but stoic German defending and poor shooting ensured the scoreline remained 1-0.

Chile’s experienced side, with an average age of 30 years and 125 days and average caps of 85, could simply not find its way past the younger Germany side.

The European side, with an average age of 24 years and 244 days and average caps of 17, were even brave enough to threaten to widen the lead with fast counter-attacks.

They thus made it the fourth time a reigning world champions were winning the FIFA Confederations Cup, after Brazil in 1997 and 2005 and France in 2001.

NAN reports that, in the tournament’s individual awards, Werner emerged the top scorer after three goals and two assists to win the Golden Boot.