Home Sports Four things we learned from Arsenal vs Chelsea 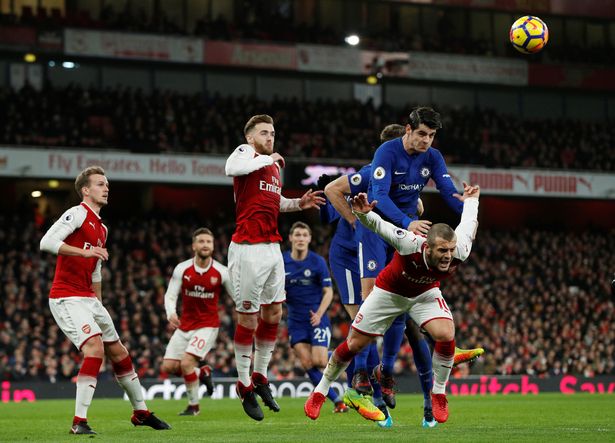 What a game. Arsenal and Chelsea played out a pulsating 2-2 draw at the Emirates Stadium on Wednesday to showcase the bets the Premier League has to offer.

Arsenal took the lead via Jack Wilshere, but Chelsea scored twice through Eden Hazard and Marcos Alonso before Hector Bellerin equalized late on.

Here’s what we learned from an absorbing encounter in north London between the crosstown rivals.

We rave about sublime goals and attacking play time and time again (we usually do when Arsenal play at home. See: Arsenal v. Tottenham, Arsenal v. Man United and Arsenal v. Liverpool this season) but Wednesday was the time to applaud two top-class goalkeepers who put on a clinic despite conceding two goals each.

Both Thibaut Courtois and the man he took the No.1 jersey from at Chelsea, Petr Cech, excelled as they each made at least three key saves and Courtois was the slightly busier of the two.

Courtois usurped Cech as Chelsea’s first-choice goalkeeper in 2014 and you can see why it was such a tough decision for Jose Mourinho at the time. Both goalkeepers are very similar in the way they play the game, their size and their strengths.

Both made good stops with their feet and also by coming out and smothering chances with Cech denying Alvaro Morata late on but standing his ground at the crucial moment.

With Courtois said to be in talks with Chelsea over a new contract amid constant links to Real Madrid, he continues to be the main man battling David De Gea as the top goalkeeper in the PL. Yet the experienced head of Petr Cech also reminded us just how good he still is.

Jack Wilshere has now started six-straight PL games for Arsenal for the first time since September-October 2013 and he continued his resurgence with a fine goal and an all-action display in central midfield.

Is their still rust after his numerous injuries over the past few years? Yes. Undoubtedly. But the England midfielder is doing his chances of earning a new contract at Arsenal no harm, just as Arsene Wenger said last month.

Wilshere, 26, is at a real crossroads in his career but if he can stay fit we all know the quality he has on the ball and being able to make the Gunners tick in central midfield. He is rusty and at times the pace of the game seemed to nullify his impact, but he popped up to score a goal and tried his best to drive Arsenal on from midfield despite getting a yellow card in the first half for clattering Cesc Fabregas.

The one disappointing moment from Wilshere was when he went down easily under a challenge from the excellent Andreas Christensen in the second half but wasn’t shown a yellow card for simulation. He should have been sent off before he scored Arsenal’s first goal in a breathtaking draw.

The debate of simulation has cropped up time and time again over the festive period and it did so at the Emirates. Two crucial moments in the game both involved questionable dives from star players and both could have been cleared up with the VAR system.

Wilshere should have been handed a second yellow card for simulation by referee Antony Taylor, it was as simple as that and the referee had a decent view but may have been slightly blocked.

Then, the big turning point of the game came as Hazard won a penalty kick. The Belgian went down under minimal contact from Hector Bellerin but Taylor pointed to the penalty spot and Chelsea equalized just as Arsenal were in the ascendancy and looked like running away with things.

Wenger was furious with a late handball decision against his side at West Brom on New Year’s Eve which cost them a win, while the likes of Wilfried Zaha has been accused of diving and Mourinho complained about a handball which could have led to a penalty kick for his side over the festive period.

When Chelsea and Arsenal meet in the in the League Cup semifinals later this month VAR will be used and both managers will probably be very happy with that.

Given VAR’s problems at the Confederations Cup last summer, you can understand why the PL is waiting before bringing it in full time.

But with so many debatable calls and managers upset with decisions from referees, surely now is the time to give the officials extra help and take some of the tougher decisions out of their hands and to a team upstairs watching on TV?

Alvaro Morata has been deadly for most of his first season at Chelsea in the Premier League. He wasn’t on Wednesday.

The Spaniard missed three glorious chances, slotting wide after going clean through early on, then dinking over in the second half when one-on-one with Cech, while he hit a tame effort at the Arsenal goalkeeper in stoppage time with the score locked at 2-2.

Morata can’t be faulted for the way he’s settled in the PL since arriving at Chelsea in the summer (12 goals in all competitions so far) but he certainly fluffed his lines in the big moments on Wednesday.

He should have given Chelsea the three points which would’ve pushed them up to second place in the PL table and on the same night that Diego Costa scored on his second debut for Atletico Madrid, the man who replaced him at Chelsea, Morata, proved his isn’t quite as clinical. Not yet, anyway.