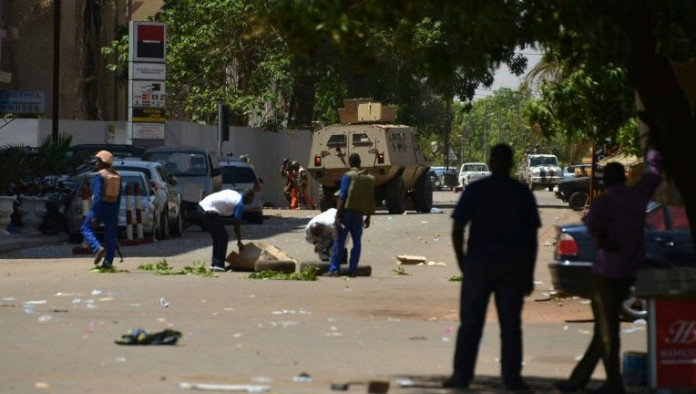 The Burkinabe government said four terrorists who attacked the capital Ouagadougou on Friday, had been killed.

It however said their accomplices might be on the run.

The capital had come under multiple attacks with the French embassy, the French cultural centre and the country’s military headquarters targeted.

Witnesses said five armed men got out of a car and opened fire on passersby before heading towards the embassy in the centre of the city.

An AFP reporter heard heavy exchange of gunfire and saw a blazing vehicle, which witnesses said was the car used by the assailants.

Police and army units were deployed in the area.

Other witnesses said there was an explosion near the headquarters of the Burkinabe armed forces and the French cultural centre, which are located about a kilometre (half a mile) from the site of the first attack.

There was no early information about any casualties.

A government statement clarified the situation, saying the four terrorists that attacked Ouagadougou had been eliminated.

There are no details on civilian casualties at the moment, the Special Forces are continuing operations, according to the government statement.

“The situation is under control at French diplomatic premises,” in Burkina Faso’s capital, which came under attack Friday, a French foreign ministry source said.

Burkina Faso police director general said security units had been deployed to the scene and had urged people to stay away from the area.

In Paris, President Emmanuel Macron’s office said the French leader was “being informed in real time” of the situation.

Burkina Faso is one of a string of fragile countries on the southern rim of the Sahara that are battling jihadist groups.

The insurgency has caused thousands of deaths, prompted tens of thousands to flee their homes and dealt crippling blows to economies that are already among the poorest in the world.

On January 15 2016, 30 people, including six Canadians and five Europeans, were killed in a jihadist attack on a hotel and restaurant in the city centre.

The United Nations also has a 12,000-strong peacekeeping force in Mali called MINUSMA, which has taken heavy casualties.