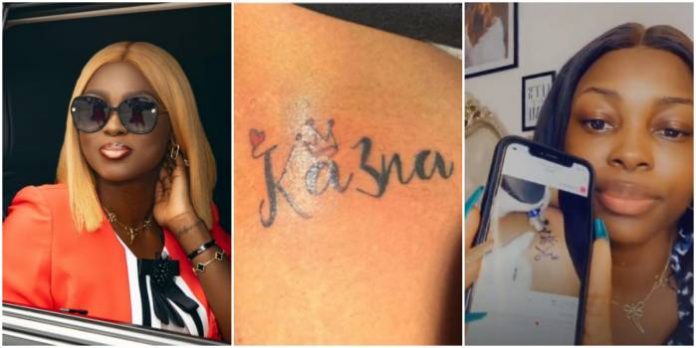 THEWILL recalls that on Monday, photos and videos of the female fan getting the tattoo with the name ‘Ka3na’ went viral on social media.

Reacting, the 26-year-old reality star took to her social media account on Tuesday to condemn the action of the lady, saying there were better ways to show love to a celebrity than getting a tattoo of them.

The entrepreneur also frowned at celebrities who encouraged their fans to indulge in the act.

“How can you do something like this to your own body? Tattoo is permanent. If you love me and you are my fan, there are ways you can actually show that by always posting my pictures, always on my comment section, always attending my events, seeing me and taking pictures with me,” she wrote.

“Not tattoing my name on your body. Guys this is wrong. Celebrities that encourage these fans need to stop. How can you be giving these naive fans money for tattooing your face or name on their body when you know this is really wrong to themselves. What this particular girl did is wrong and I’m not in support of it.

“Like the other day, I was frowning at a particular video of a lady who tattooed Davido’s kids on her back and I was like what amount of compensation will make you do that to your own body. There are other ways of showing love to celebrities rather than tattooing their name on your skin.”

Responding to the allegations that she initiated the idea, Ka3na stated that she was only joking about it.

“Two weeks ago I was catching cruise on my Twitter, saying who can tattoo the boss lady on their body which I meant as a joke. Later that day I did an Instagram live where I said I was just catching cruise and no one should take it seriously,” she added. (THEWILL)