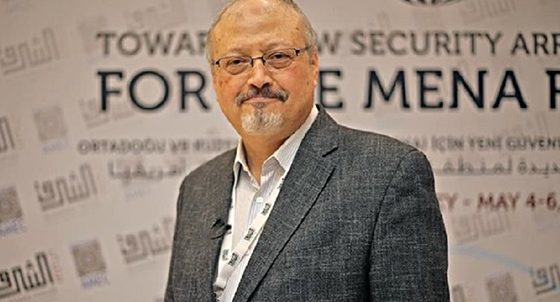 The CIA believes that Saudi Crown Prince Mohammed bin Salman ordered the murder of journalist Jamal Khashoggi, according to US media reports.

Sources close to the agency said it had assessed the evidence in detail.

It is understood there is no “smoking gun” but US officials think such an operation would need the prince’s approval.

Saudi Arabia has called the claim false and insisted that the crown prince knew nothing of plans for the killing.

Speaking on the sidelines of a summit in Papua New Guinea, he said the US was “determined to hold all of those accountable who are responsible for that murder”.

The journalist was killed in the Saudi consulate in Istanbul on 2 October. His body has not been found.

Turkey insists the order came from the highest levels.

The Washington Post, which Khashoggi worked for, says the CIA assessment was based partly on a phone call made by the crown prince’s brother, Prince Khaled bin Salman, the Saudi ambassador to the US.

Prince Khaled allegedly called Khashoggi at the direction of his brother and gave him assurances that he would be safe to go to the consulate.

Prince Khaled said he had not been in contact with Khashoggi for nearly a year. He said he had never suggested Khashoggi – who had been in London for a conference until the day before his disappearance – should go to Turkey for any reason.

Neither the White House nor the US State Department has commented on the reports, but sources say they have been informed of the CIA’s conclusions.

It is understood agents have also examined a call made to a senior aide of Crown Prince bin Salman by the team that carried out the killing.

Sources quoted in the US media stressed that there was no single piece of evidence linking the crown prince directly to the murder, but officials believe such an operation would have needed his approval.

“The accepted position is that there is no way this happened without him being aware or involved,” the Washington Post quoted a source as saying.

At a news conference in Riyadh on Thursday, Deputy Public Prosecutor Shalaan bin Rajih Shalaan said Khashoggi was given a lethal injection and his body was dismembered inside the consulate after his death.

The body parts were then handed over to a local “collaborator” outside the grounds, he added. A composite sketch of the collaborator has been produced and investigations are continuing to locate the remains.

The wreckage of a submarine which went missing with 44 crew on board a year ago has been found, the Argentine navy says.

The navy stopped its rescue mission two weeks after the sub’s disappearance.

However, a year and a day after it went missing, officials announced it had been found 800m (2,620ft) below the surface of the Atlantic Ocean.

According to a tweet from the Argentine navy, the ARA San Juan had been positively identified under the water by a US company.

The navy had earlier shared a picture from the seabed, suggesting a 60m-long object might be the missing submarine.

Relatives gathered to remember their loved ones earlier this week, while President Mauricio Macri promised to keep up the search for the submarine.

The ARA San Juan was returning from a routine mission to Ushuaia, near the southern tip of South America, when it reported an “electrical breakdown”.

According to naval commander Gabriel Galeazzi, the submarine surfaced and reported what was described as a “short circuit” in the vessel’s batteries.

The sub was ordered to cut its mission short and return to the naval base in Mar del Plata immediately.

The Argentine navy’s last contact with the vessel was at approximately 07:30 (10:30 GMT) on 15 November, at which point its captain reportedly confirmed that the crew were well.

Eight days after the sub vanished, the Vienna-based Comprehensive Nuclear Test-Ban Treaty Organisation said that it had detected a noise a few hours after the sub’s last contact.

The body, which operates a network of listening posts to monitor nuclear explosions, said that there had been a “hydro-acoustic anomaly” about 30 nautical miles (60km) north of the sub’s last-known position at 10:31 (13:31 GMT).

The Argentine navy said it could have been the sound of the submarine imploding.

Navy spokesman Enrique Balbi told reporters last year that water had entered the submarine’s snorkel, which can be used to take in air from above the surface when the submarine is submerged.

The saltwater dripped on to a battery tray in the prow, causing the battery to short circuit and to smoulder, he said. The sub had reported the fault and had been ordered back to base but then disappeared.