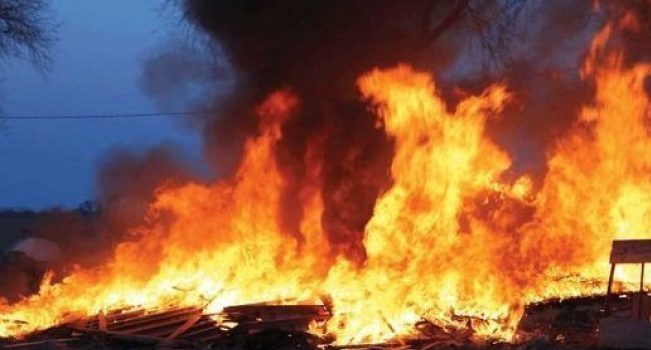 Fire has destroyed 14 of the 46 rooms in a family house at Onibata Compound, Alore Area in Ilorin,  Kwara.
A statement issued on Monday in Ilorin by Mr. Hakeem Hassan, Public Relations Officer of the Kwara Fire Service, said the outbreak occured in the early hours of Monday at about 12.02 a.m.
”The Brigade was summoned to the scene through a telephone call by one Mr. Abdulganiyu, and on getting to the incident, we discovered that the fire was still very much raging and had already destroyed many rooms in the burning building, owing to their lateness in alerting us.
READ ALSO: Proscribed IPOB Denies Responsibility Over Attack On Police Headquarters In Imo
”However, our firemen were able to perform excellently well because of their technical knowledge of fire fighting, and in no time the ravaging fire was totally extinguished.
”The inferno was suspected to have been caused by power surge,” Hassan said.
He also quoted the Director of Kwara Fire Service, Mr. John Falade, as urging the general public to cultivate the habit of calling the fire service on time whenever there is any emergency in their areas.