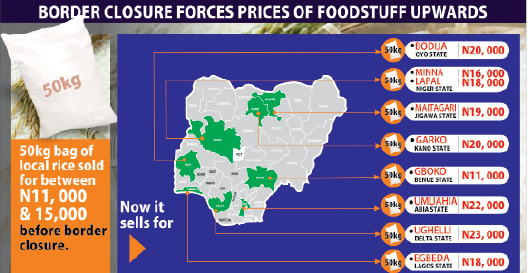 Residents of Makurdi, the Benue state capital are visiting markets and shops to stock up for the Christmas and New year celebrations even as prices of food commodities increased in many markets across the state.

A survey by our correspondent around markets in Makurdi showed that the markets are witnessing large influx of customers even on sundays.

At the High Level, Wurukum and Wadata markets, Next Edition discovered that the prices of rice, beans, tomatoes, onion, pepper and vegetable oil have soared relatively above what it was in the last few weeks.

Mallam Ali Musa told our correspondent at the High Level market that they are also expecting the prices to go higher in this last week to Christmas.

He said a large percentage of beans sold in Makurdi markets come from the North East of Nigeria.

According to him, paint bucket costs between N1200 to N1300 for honey, Iron and Adamawa beans.

Potatoes brought in from Jos, Plateau state, is 2500 for paint bucket, while garri produced in Benue state still remains at 400 for paint bucket which is the standard measuring container in the state. White garri is cheaper than red garri by N50 in most markets. Added advantage to the Benue garri is its vitamins A fortification making it ideal for all to consume.

This, marketers also confim has pushed the price of flour up from N1100 to N1500 depending on the measure.

Other ingredients in high demand at the yulitide season are tomatoes, pepper and onions which vary in cost and from where it is brought. While tomatoes grown in Benue are cheaper, those brought in from Jos are slightly expensive.

Our correspondent also observed that most shops and supermarkets have stocked their shops with the choicest alcoholic and soft drinks, wines, spirits and vodka. Shop owners say they also fear that the prices of some may rise as the festivities approach.