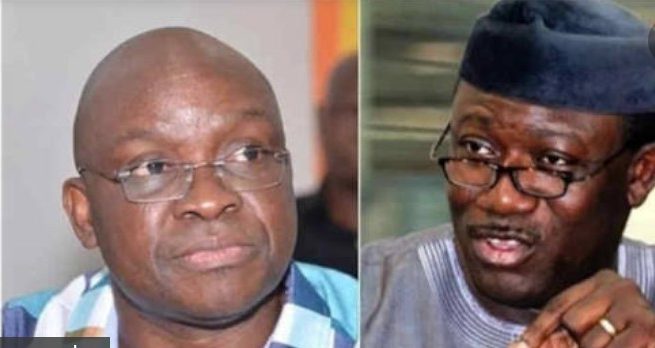 Governor Ayodele Fayose of Ekiti State, on Sunday, declared that his handover note was ready, just as he warned the Governor-elect of Ekiti State, Kayode Fayemi, against spreading falsehood about the financial position of the state.

The governor spoke against the backdrop of the claim that the state was indebted to the tune of N117 billion.

In a statement by his Special Assistant on Public Communications and New Media, Lere Olayinka, the governor said Fayemi should wait till October 16, 2018 when he would hand over to him.

He said the claim of indebtedness by Fayemi was a mere excuse to cover his inadequacies.

According to him, Fayemi should rather face his defence at the tribunal and stop spreading falsehood.

Fayose who was reported to have ignored the transition committee set up by Fayemi said the committee was illegally constituted.

He said it was surprising that the committee which claimed that it did not get his cooperation was able to arrive at an estimate of N117 billion being debt owed by the state government under him.

He reiterated that his government only received N10 billion grant from the Excess Crude Account, released to all states for capital projects as well as Budget Support fund from the Federal Government.