The Lagos State Government has made available a N2bn relief fund for victims of Sunday’s explosion in the Abule-Ado area of the state.

The fund was announced by the state governor, Babajide Sanwo-Olu, on Monday while addressing journalists at the scene of the explosion.

He said that the sum of N250m will be released immediately even as he announced that an investigative committee chaired by Obafemi Hamzat, deputy governor of Lagos, had been set up to look into the incident behind the explosion.

The committee has two weeks to do an indepth investigation into the cause of the incident and what needs to be done to ensure that it does not happen again.

At least 20 persons have been confirmed dead as a result of the incident while over 50 houses were destroyed by the explosion on Sunday. 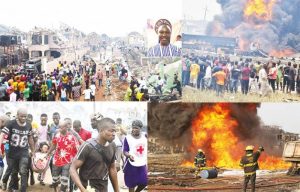