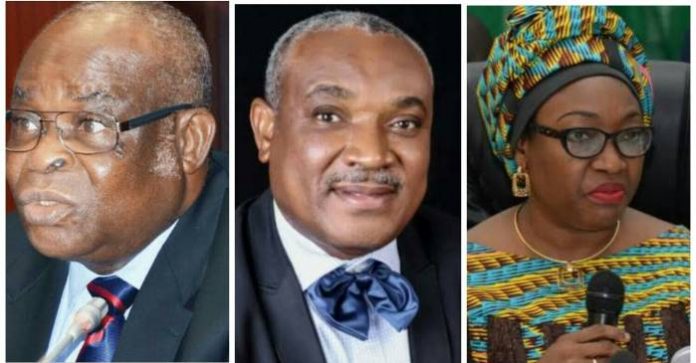 Three indigenes of Cross River State occupying top Federal Government positions under the present administration are losing their positions because of alleged corruption.

The top officials affected include former Chief Justice of Nigeria (CJN) Walter Onnoghen, Chairman of the Special Investigation Panel for the Recovery of Public Property, Okoi Obono-Obla and the Head of Service of the Federation, Winifred Oyo Ita.

While Mr. Onnoghen, a former CJN and an indigene of the state has already been removed from office by President Muhammadu Buhari, the two others are still battling to save their career.

Mr. Onnoghen was suspended a day to the inauguration of the country’s election petition tribunals and weeks before the presidential election.

This triggered a backlash as many, especially opposition and civil society actors said the move was a blatant violation of the principles of separation of powers and an assault on the judiciary.

On April 18, the Tribunal presided over by Umar Danladi convicted Mr. Onnoghen of falsely declaring his assets and ordered him to resign his position as the CJN.

Mr. Danladi said the Tribunal found the former CJN guilty of hiding the extent of his wealth.

Faced with an imminent sack by the National Judicial Council (NJC) which was already investigating the allegation made against him, Mr. Onnoghen swiftly resigned and Cross River State mourned.

Long before the travails of Mr. Onnoghen began, Mr. Obono-Obla had been struggling with the proverbial banana peel.

Trouble started when he went on a rampage shortly after he was appointed the chairman of the Special Investigation Panel for the Recovery of Public Property.

It was the House of Representatives that first took on the tough-talking Cross Riverian when it set up an ad hoc committee to investigate him.

In the course of its investigation, the House found out that the anti-corruption czar, was not clean after all as he was said to have forged his school certificate.

During the investigation, the registrar of the West African Examinations Council (WAEC) had under oath confirmed that Mr Obono-Obla’s certificate was forged.

Following the completion of its investigation, the House, in December 2018 passed a resolution urging Mr. Buhari to sack Mr Obono-Obla and subsequently hand him over to federal authorities for prosecution.

It also called on the University of Jos and the Nigerian Law School to withdraw the respective certificates they issued to the anti-corruption crusader.

Mr Obono-Obla lampooned the lawmakers at the time, saying they were after him because of his unrelenting pursuit of corrupt persons, especially those within the corridors of power.

While he was running around hunting alleged corrupt persons, ridiculing and confiscating their properties, the Independent Corrupt Practices and other Related Offenses Commission (ICPC) was investigating him.

Heavily-armed police officers were immediately assigned to seal up his office, apparently to protect key pieces of evidence from being tampered with as the administration sets out to try the anti-corruption czar.

The Secretary to the Government of the Federation, Boss Mustapha had communicated Mr. Obono-Obla’s suspension from duty.

However, the president is said to have taken the action based on the outcome of an investigation on the Cross River-born politician by the ICPC.

With feelers from the Presidency and ICPC, it seems Mr. Obono-Obla may be heading for a long drawn battle to prove his innocence on charges ranging from perjury and corruption.

On her part, Mrs. Oyo-Ita is said to have been quizzed by the Economic and Financial Crimes Commission (EFCC) over alleged N3billion contract scam.

After undergoing a four-day grilling at the EFCC headquarters, Mrs Oyo-Ita was granted administrative bail.

Immediately she regained her freedom, the HoS is said to have rushed to the hospital for urgent medical attention.

At the hospital in Jabi District where she has been placed on admission, only a few visitors are allowed to see her.

This newspaper learnt that N600million has been traced to the account of one of her key aides, who could not explain how the money came about.

Preliminary investigation by the anti-graft agency has shown how a whooping N3billion came into Mr. Oyo-Ita’s account through proxy companies.

The sleaze is said to date back to the time she served as permanent secretary under a minister who was equally being investigated for corrupt practices.

Already, an investigation by EFCC is said to have also showed how Mrs. Oyo-Ita secured “juicy” government contracts through proxy firms from some ministries including Special Duties, Power and Works.

While the Presidency has kept mum about the ordeals of the country’s first civil servant, observers insist she may be shown the way of office soon.

If Mr. Obono-Obla and Mrs. Oyo-Ita are disgraced out of their offices on the heels of a similar experience by Mr. Onnoghen, Cross River State would have lost three key positions in the Buhari government under one year.

Currently, people of the state, who were hitherto known for their unparalleled honesty, thrift and discipline, are now being mocked on social media by commentators.