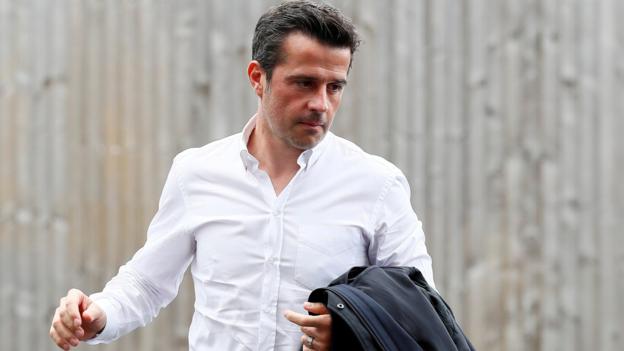 Everton have sacked manager Marco Silva after 18 months, with the club in the Premier League relegation zone after their Merseyside derby humiliation.

Wednesday’s 5-2 defeat by Liverpool at Anfield was their ninth of the season and leaves them 18th in the Premier League after three successive losses.

One of the early candidates to succeed Silva is reported to be his compatriot, Shanghai SIPG’s Vitor Pereira.

Former striker Duncan Ferguson has been put in temporary charge and will manage the side against Chelsea on Saturday.

The club said they aim to appoint a new manager “as swiftly as possible”.

Everton are now searching for their fourth permanent boss since Roberto Martinez was sacked in May 2016.

Former Everton manager David Moyes has been considered as a potential interim successor, but the suggestion has sparked a largely negative reaction from supporters and it remains to be seen whether majority shareholder Farhad Moshiri and his boardroom colleagues ignore that and invite the 56-year-old Scot to return.

Moyes spent 11 years as Everton manager, and his return has been seen by fans as a retrograde step given his lack of success since leaving for Manchester United in 2013.

Portuguese Silva, 42, is the fifth managerial dismissal in the Premier League this season, after the departures of Javi Gracia – who had replaced Silva at Vicarage Road – and Quique Sanchez Flores from Watford, as well as Tottenham’s Mauricio Pochettino and Arsenal’s Unai Emery.