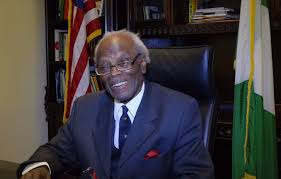 Tributes are trickling in for late Justice Sylvanus Nsofor, Nigeria’s immediate-past ambassador to the United States, who died on Thursday.

The 85-year-old retired Justice of the Court of Appeal died at a U.S hospital, where he was receiving treatment for an undisclosed illness.

Reacting to the news, the Consul-General of Nigeria in New York,  Mr. Benaoyagha Okoyen, said the death of the envoy came as a shock to the mission, describing Nsofor as a man of integrity, who gave his best in the service of his country.

“The late ambassador was a patriotic Nigerian, who served the nation well both as a judge and as a diplomat. As a judge, he discharged his duties without fear or favour, and it was on that basis that President Muhammadu Buhari appointed him ambassador.

“And I am sure the president is proud of his service,” Okoyen said.

“I pray that the Almighty will comfort his widow and all those he left behind, and grant them the grace to bear the loss,” he said.

The Consul-General of Nigeria in Atlanta, Mrs Aisha Musa, expressed sadness over the incident, saying that the late envoy would be remembered for his patriotism and remarkable contributions to Nigeria’s Judiciary and diplomacy.

She expressed her sympathy to members of his family and staff of the Nigerian Embassy in Washington.

Ms Patience Kay, a Nigerian community leader, described the late ambassador as a great, passionate and selfless leader, who would be greatly missed .

“Amb. Nsofor came to Washington DC and restructured the diplomatic missions. He brought relevance and productivity to the system.

“People might be talking about his age. Yes, he was old, but his mind was young and sharp. He was a visionary and good adviser,” Kay said.

She noted that Nsofor was like a father to members of the Nigerian community, saying that he listened to their cries and helped to resolve their issues.(NAN)