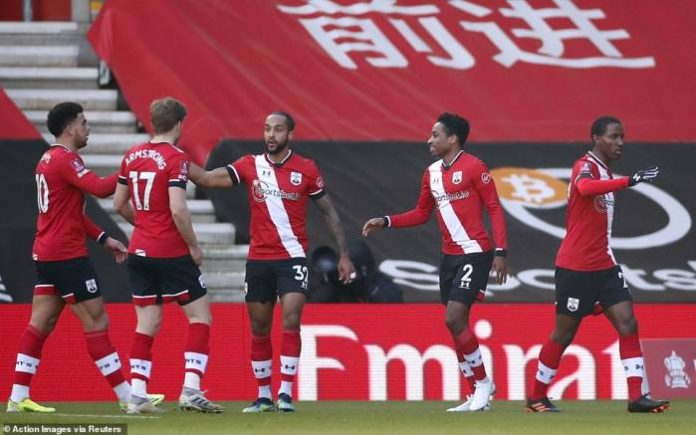 Pep Guardiola’s Manchester City battled back from a goal down to claim a 3-1 away win and Arsenal lost 1-0 at Southampton with Brazilian defender Gabriel scoring an own goal.

Alfie May stunned Manchester City in the 59th minute when he knocked in Ben Tozer’s long throw-in to put Cheltenham ahead.

But coach Michael Duff’s men could not hold on for an almighty upset in their first meeting with the Premier League giants.

“They (Manchester City) are world-class players and scored three in the last 10 minutes.”

“I didn’t have regrets even when we were 1-0 down, we had clear chance from the first minute,” said Manchester City manager Guardiola.

“We got it to 1-1 and it was tight. We came here with humility and had the quality to make the difference.”

“We wanted to keep the momentum going from the league. 5-1 is as good as it gets.”

Meanwhile, Arsenal’s run as defending champions came to an end in unfortunate circumstances with Gabriel’s error in the 24th minute against Southampton.

“We’re really sad to be out of the competition,” said Arsenal manager Mikel Arteta.

“It was an even game. In the second half, we added more quality. We became more dominant and created chances, but it wasn’t enough.”

The Saints advance to the fifth round, where they will travel to Wolverhampton Wanderers, who knocked out sixth-tier side Chorley to advance on Friday.

West Ham United will next play the winner of either Manchester United or Liverpool, who play on Sunday, after their 4-0 home win against third-tier Doncaster Rovers.

The Hammers started to cruise to victory with first-half goals from Pablo Fornals and Andriy Yarmolenko.

Then, a second-half own goal from Doncaster’s Andy Butler and a debut goal from striker Oladapo Afolayan sealed the result.

Afolayan was only named in David Moyes’ side the night before the game after the 23-year-old played for the club’s academy team.

“I played 60 minutes last night for the Under-23s,” Afolayan explained.

“When I came off I got told I was in the squad (against Doncaster). “I have played in the FA Cup before. To score in the fourth round here is a dream.”

Fellow English Premier League sides Sheffield United and Brighton and Hove Albion are also through after triumphing at home.

Bristol City of the second-tier Championship will be Sheffield United’s next opponents following a 3-0 success at Millwall.

Brighton await the winners of Brentford against Leicester City on Sunday for their fifth-round tie.

Another Championship side in Barnsley advanced with a 1-0 victory against Norwich City to set up a meeting with either Chelsea or her Luton Town in the next phase.(dpa/NAN)