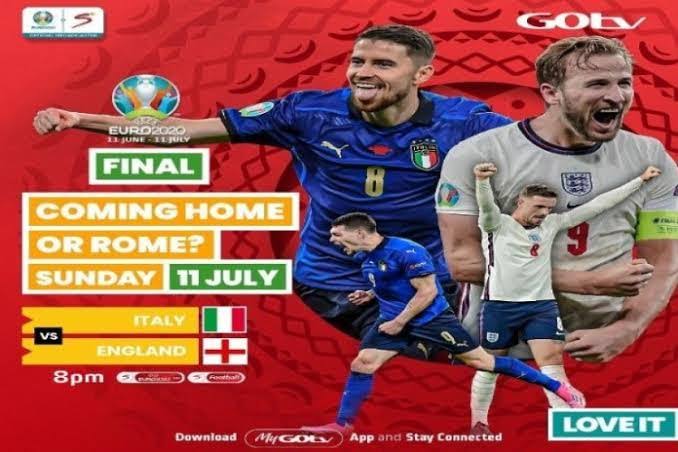 As the UEFA Euro 2020 tournament enters final run, DStv and GOtv customers get to watch all the action from the final match, live on SuperSport.

The final knockout match will be between Italy and England at Wembley Stadium on July 11, at 8pm, live on SS Football (DStv channel 205 and GOtv channel 31).

Damilola Olujide, the Media Coordinator for DStv/GOtv, made this known in a statement on Saturday in Lagos.

According to the statement, the other channels to show the final match include SS Euro 2020 (DStv channel 204 and GOtv channel 32).

Italy’s run to the finals saw them edge pass teams through the course of the tournament without much pressure, but deserved victories by hard work.

However, they had to resort to extra time and penalties to finally overcome Spain in the first Semifinal on Tuesday night.

READ ALSO: Why Onochie Should Not Be Confirmed As INEC Commissioner – CUPP

An equaliser from Spain’s Alvaro Morata sent the game to a full 120 minutes, but a save by Italy’s goalie, Donnarumma from the same attacker’s penalty in the shootout proved the key.

England’s semi-final also went a full 120 minutes, but a Harry Kane goal – scored off the rebound from a penalty saved by Kasper Schmeichel.

This helped ensure that they (England) triumphed 2-1 over a brave Danish side.

The Danish team had given the tournament so much in the wake of their star player, Christian Eriksen’s collapse in their opening game against Finland.

The Three Lions are into their first European Championship Final and a first major tournament final since they won the World Cup 55 years ago.

This is as part of SuperSport extensive coverage of the UEFA Euro 2020 tournament.(NAN)