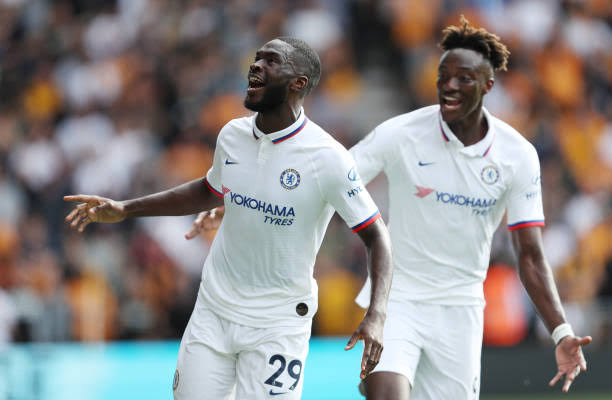 Nigeria’s duo of Tammy Abraham and Fikayo Tomori were included in a 25-man squad on Thursday for away Euro 2020 qualifiers against the Czech Republic and Bulgaria.

Canadian-born Tomori however, is getting his first call-up for the English senior national team.

Striker Abraham turned 22 on Wednesday, celebrating in style with the opener in his club’s 2-1 UEFA Champions League victory at Lille.

He is the leading English goal scorer in the English Premier League (EPL).

In spite of making two senior appearances for England in friendlies two years ago, he is also eligible for Nigeria and had said he was undecided about his international future.

Manager Gareth Southgate told reporters he had not discussed the matter with Abraham, and had left it to Chelsea boss Frank Lampard to tell the player he was in the squad.

“We’ve got close to hundreds of players now in our system who are dual nationality,” he added.

“I don’t think it’s ethically right just to give a player a cap to make sure that they can’t play for somebody else.

“Fik and Tammy are in on merit and I’m not going to guarantee that they are going to get on the pitch,” said Southgate. “But they have both been part of our junior system right the way through.

“As far as we are concerned the two boys have been developed through English football and are English players.

“I’m sure they have a huge desire to play for England at senior level.”

Alli, who has made only four appearances for Tottenham Hotspur since returning from a hamstring injury, was omitted along with fellow-midfielders Lingard and Alex Oxlade-Chamberlain.

There was also no place for Manchester City defender Kyle Walker.

Southgate said he was playing well but the bar was set high and he had lost out to strong competition.

He expected Oxlade-Chamberlain and Alli to challenge for places in coming months, while he retained faith also in Lingard fighting back.

England, who top Group A with four wins out of four matches, play the Czechs in Prague on Oct.

11 and Bulgaria in Sofia on Oct. 14.
Southgate said it was getting increasingly difficult to pick the squad, given the intense competition for places, and some of the choices had been hard to make.

Four Chelsea players feature and the manager praised Lampard, who took over at Stamford Bridge in July, for giving them their opportunities to shine.