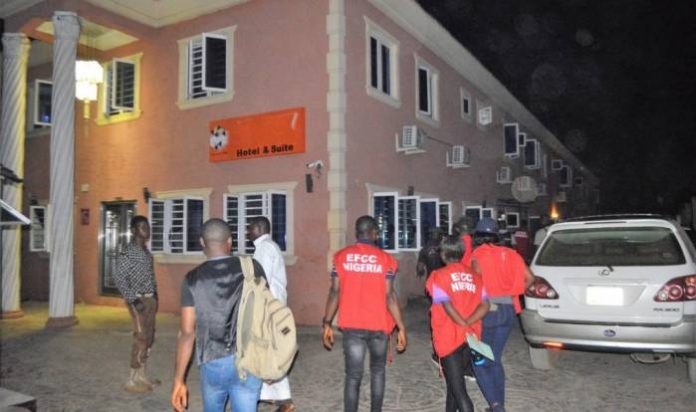 The Economic and Financial Crimes Commission, EFCC, said it has arrested a suspected fraud kingpin and 26 others in a hotel in Lagos.

Disclosing this in a statement on Friday, the EFCC spokesperson, Wilson Uwujaren, said that operatives of Ibadan Zonal Office of the commission, made the arrests on Thursday.

He said: “EFCC operatives ”stormed” Modzak Hotel, Abule-Egba, Lagos, believed to be a hideout for suspected internet fraudsters and arrested one suspect, who is believed to be their kingpin.

“(The suspect), owner of the hotel, was arrested alongside an army of young men, whose ages range between 18 and 35 years, with no specific mission for being in the facility.

“Some other suspects were arrested in suspect’s Beckley Estate residence also in Lagos, bringing the number to27.”

Uwujaren said that the arrested suspects were being interrogation.

The EFCC spokesman assured that the suspects would be charged to court as soon as investigations were concluded.