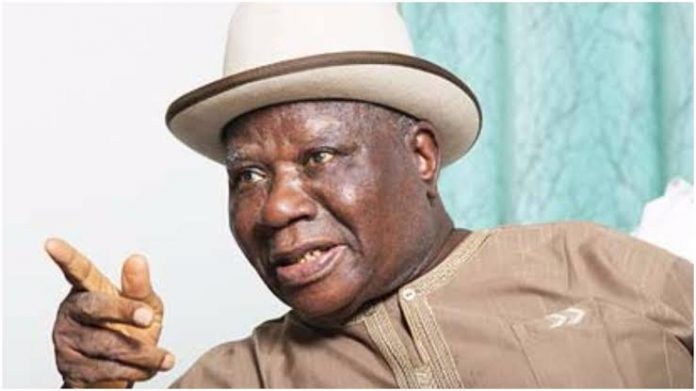 The Buhari Media Organisation (BMO) has accused prominent Niger Delta leader, Pa Edwin Clark of deliberately conflating issues on the proposed naval base in Kano in order to divert attention from his silence over the grand theft of public funds recently unearthed in the region.

In a statement signed by its Chairman Niyi Akinsiju and Secretary Cassidy Madueke, the group said that the arguments put up by the leader of the Pan Niger Delta Forum (PANDEF) in the open letter to President Muhammadu Buhari on the matter were entirely based on false premises.

“Like many Nigerians, we are surprised that after literally disappearing from the public scene for several weeks, Pa Clark has emerged suddenly, not to speak on the report of the forensic audit of the Niger Delta Development Commission (NDDC), but to push a worn-out allegation of nepotism against the President on what he called a waste of public fund.

“We wonder what could be more wasteful than the N6tn that went down the drain through over 13,000 fictitious projects that were paid for but not delivered within 20 years in the region, which the elder statesman claims to have so much interest in its development.

“Shouldn’t the elder statesman be looking at cooperating with the federal authorities and President Buhari, in particular, to get to the root of this gross injustice to the people he claims to always speak for?

“But here we have an influential personality from the region writing a 28-paragraph letter full of lies and innuendoes based on false premises, like virtually all the allegations of nepotism he has made against the President since 2015,” it said.

BMO added: “We dare say that the position taken by Chief Clark on the proposed naval base in Kano showed a clear ethnic bias that should not be expected from an elder statesman who was once Nigeria’s information minister.

“A clear insight into this mindset was his reference to the ongoing AKK gas project which he argued is from resources from the Niger Delta yet, he completely ignored to even acknowledge the recently uncovered NDDC heist.”

It also noted that Clark’s lengthy writeup came few days after the Naval authorities had given a clear insight into the nature of the proposed base.

“In one of the paragraphs of the evil missive, the PANDEF leader claimed that ‘Naval services are meant for the riverine and ocean lines while Air Force and Army are meant for the land areas. He also went ahead to suggest, almost comically, how it will be impossible to navigate a navy ship through the waters of Lagos to the desert naval base in Kano.

“We see this as yet another instance of Pa Clark’s penchant for miseducating his audience even after the Naval authorities had responded to public queries over the proposal to have three naval bases in Lekki, Oguta and Kano.

“We recall that a few days ago, the Navy gave a detailed explanation of plans to decongest its presence in the Lagos area by expanding to locations other than Lagos, Calabar, Warri and Port Harcourt.

“For starters, Naval Spokesman, Navy Commodore Suleman Dahun, said in a statement that the base in Kano was intended to be home of the newly created Nigerian Navy Logistics College, while noting that ‘all naval establishments and units are called bases, notwithstanding their physical location,” BMO said.

It added: ”The Navy said that ‘depending on their responsibilities, naval bases could be for operations, training, logistics or administration’ and pointed at its decision to establish the Nigerian Navy Finance and Logistics College in Owerrinta, Abia; Nigerian Navy School of Armament Technology in Kachia, Kaduna; as well as the School of Health Sciences in Offa, Kwara.”(NAN)