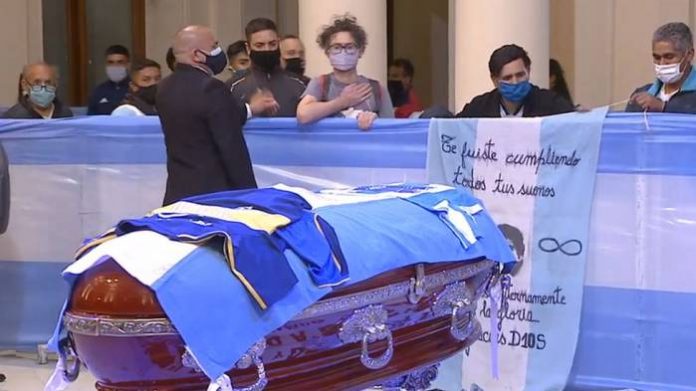 Football legend Diego Maradona has been buried in a private ceremony after a day of emotional scenes in the Argentine capital Buenos Aires.

Only around two dozen relatives and close friends attended the final ceremony on Thursday.

But earlier huge crowds turned out to pay their respects, with many weeping, blowing kisses and praying as they filed past his coffin.

Maradona died of a heart attack on Wednesday aged 60.

His death triggered mourning around the world but nowhere was it felt more fiercely than in a country that saw him as a national hero.

Maradona’s coffin – draped in Argentina’s national flag and football shirt, bearing his trademark number 10 on the back – was on public display at the presidential palace on Thursday.

By mid-afternoon queues stretched back for more than a kilometre, and police clashed with mourners as they tried to close off the palace in anticipation of the wake scheduled for 16:00 local time (19:00 GMT).

There were reports of tear gas and rubber bullets being used as officers in riot gear struggled to hold back the crowd.

One well-wisher, Rubén Hernández, thought the police had overreacted.

“We were calm lining up and suddenly, the police started to fire rubber bullets,” he said, quoted by Reuters news agency.

“Crazy, I just want to say goodbye to Diego.”

Authorities were eventually forced to stop public viewing of the coffin to keep the peace.

The motorised funeral cortege drove his body to the Bella Vista cemetery on the outskirts of the city, where he was buried next to the graves of his parents.
‘He was everything for us’

At the Italian club Napoli, where Maradona played for seven years and transformed their fortunes, fans flocked to the stadium to pay their respects chanting “Diego, Diego!”.

It is the second day people have defied a coronavirus lockdown to pay tribute, ahead of Napoli’s closed-door Europa League fixture against the Croatian team Rijeka.

The Napoli team, who all stepped onto the pitch wearing black armbands and Maradona’s No. 10 jersey, won the match 2-0.

“He was unique, he represented everything, everything for us Neapolitans,” fan Gianni Autiero told Reuters. “I have cried for only a few people in my life, and Diego is one of them.”

One of the greatest football players of all time, Maradona had a troubled personal life marked by cocaine and alcohol addiction. He had successful surgery on a brain blood clot earlier in November and was to be treated for alcohol dependency.

Local media said the preliminary results of an autopsy showed he had suffered “acute heart failure”.
The former Argentina attacking midfielder and manager died at his home in Tigre, near Buenos Aires. The last person to see Maradona alive was his nephew Johnny Esposito, according to statements gathered by officials.
Maradona is survived by five children and his former wife, 58-year-old Claudia Villafane, whom he split with in 2004 after 20 years of marriage.

Maradona, who also played for Barcelona, was captain of the national team when Argentina won the 1986 World Cup, scoring the famous “Hand of God” goal against England in the quarter-finals.
To score the goal, Maradona used his hand to deflect the ball past England goalkeeper Peter Shilton, but the referee did not see it. It remains one of the most controversial World Cup moments.
Former Tottenham midfielder Ossie Ardiles, who played alongside Maradona at the 1982 World Cup, told the BBC “he will be remembered as a genius in football”.
Argentina and Barcelona forward Lionel Messi also paid tribute, writing on social media: “He has left us but he will never leave us because Diego is eternal.”
Former England striker and Match of the Day host Gary Lineker, who was part of the England team beaten by Argentina at the 1986 World Cup, said Maradona was “by some distance, the best player of my generation and arguably the greatest of all time.”
In a statement on social media, the Argentine Football Association expressed “its deepest sorrow for the death of our legend”, adding: “You will always be in our hearts.”