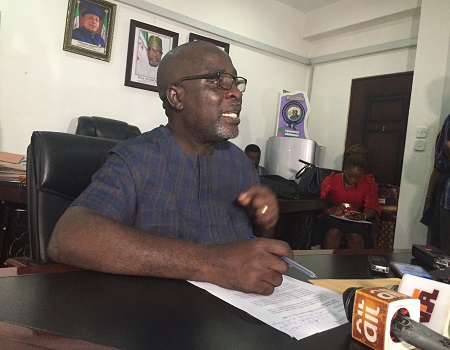 The Peoples’ Democratic Party, PDP, on Friday said the invasion of the sanctity of the Federal High Court by the Department of State Services, DSS, was further confirmation that Nigeria was finally sliding into a frightening dictatorship, under the Buhari Presidency.

The PDP described the invasion as a “forceful suspension of our constitutional order and a further battering of the judiciary.”

In a statement issued by its spokesman, Mr. Kola Ologbondiyan, the opposition party noted that “such a violation, as embarrassingly witnessed in the Abuja court this weekend, is a direct invitation to anarchy and a huge threat to the unity, peace, stability and corporate existence of our nation and the safety of our citizens.”

The party called on well-meaning Nigerians and the “international community to call the Buhari Presidency to order before its actions derail our nation and trigger a breakdown of law and order in the land.”

The statement read in full: “Today, the world watched with shock as operatives of the Presidency-controlled DSS, in a most horrific manner, swooped on the court, held the judiciary to ransom, disrupted proceedings, scared away the judge, chased away lawyers and journalists, attacked and re-arrested persons standing trial within the precincts of the court, in a manner that can only be obtainable in Idi Amin’s Uganda.

“The invasion is a forceful suspension of our constitutional order and a further battering of the judiciary, which points to an emerging lawlessness that can only find space in a military regime.

“Without prejudice to the charge against the Convener of the “Revolution Now” movement, Mr. Omoyele Sowore, the PDP holds that, in a normal democracy, it is the duty of the court to determine the fate of an accused, according to the laws and not a resort to brute force by the government to silence persons with dissenting voices.

“Our party notes that such a violation, as embarrassingly witnessed in the Abuja court this weekend, is a direct invitation to anarchy and a huge threat to the unity, peace, stability and corporate existence of our nation and the safety of our citizens.

“Indeed, this is not the Nigeria our citizens yearn for and it is imperative to restate that Nigeria, under the Buhari Presidency, is fast sliding into a dark country where, laws are suspended, the judiciary is assaulted and citizens are stripped of their fundamental rights.

“The international community must have more than a passing glance at the situation in Nigeria as any crisis in our country, God forbid, given our population, is capable of having a negative spillover effect across the African continent and other parts of the world.

“We urge Nigerians across board, irrespective of political, religious and ethnic affiliation, to unite in condemnation of dictatorial tendencies of the present administration and in defending our democracy and unity as a nation.”