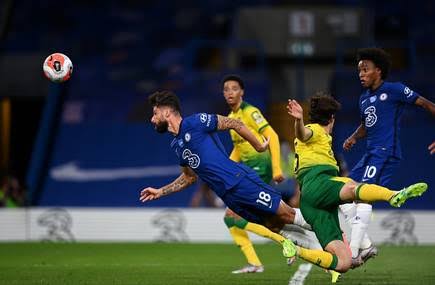 An underwhelming Chelsea on Tuesday boosted their chances of a berth in next season’s UEFA Champions League by overcoming a slow start to beat relegated Norwich City 1-0 at Stamford Bridge.

Olivier Giroud scored with virtually the last touch of the first half as Chelsea consolidated third place in the English Premier League (EPL).

They moved four points above Leicester City and Manchester United in the battle for a top-four finish.

It was an eighth successive league defeat for Norwich, who were already condemned to relegation after losing to West Ham United on Saturday.

Chelsea struggled to convert their overwhelming possession into goals but deserved the three points after a diving Giroud scored from point-blank range.

(Reuters/NAN)
Sent from my iPad