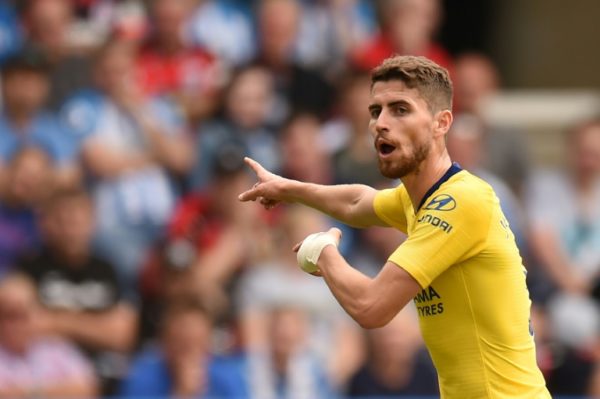 Chelsea manager Maurizio Sarri got off to a winning Premier League start as new signing Jorginho slotted home coolly from the penalty spot in a 3-0 win at Huddersfield on Saturday.

Tottenham also made light of discontent over their lack of summer transfer activity by resisting a late Newcastle onslaught to win 2-1 at St James’ Park thanks to goals from Jan Vertonghen and Dele Alli.

Elsewhere, Watford, Bournemouth and Crystal Palace picked up 2-0 wins on the opening weekend of the season.

Chelsea have endured a turbulent pre-season with Sarri replacing fellow Italian Antonio Conte less than a month before the campaign got underway.

The Londoners also smashed their transfer record and set a new world-record fee for a goalkeeper in splashing 80 million euros (£72 million, $92 million) on Kepa Arrizbalaga this week after Thibaut Courtois departed for Real Madrid.

“The situation until now has been very difficult. On Monday four players from the World Cup arrived and then on Tuesday another two, so it’s not been easy for me at the moment,” said Sarri, who believes it will take two months for his side to be at their best.

But Kepa was rarely troubled in recording a clean sheet as the visitors’ greater quality told at the John Smith’s Stadium after a slow start.

“The game was more difficult than the result. If you see the result you think it was a very easy match but in the first half it was very difficult against physical opponents,” said Sarri.

Crucially Chelsea have held onto Eden Hazard, but while the Belgian was only deemed fit enough for a place on the bench following his World Cup exertions, N’Golo Kante was thrown straight into the side after starring in Russia for world champions France.

Kante has been deployed in a more advanced role due to Jorginho’s arrival and was on the end of Willian’s cross to open the scoring 11 minutes before half-time.

Moments later Marcos Alonso was upended inside the area and Jorginho cheekily slotted home after a hop in his run up wrong-footed Ben Hamer.

Hazard was introduced for the final 15 minutes and looked keen to make up for lost time as he teed up Pedro Rodriguez to round off the scoring.

Tottenham have had a much quieter summer after becoming the first Premier League side since the transfer window was introduced in 2003 to not make a single signing.

But manager, Mauricio Pochettino, has insisted he is happy just to have retained a host of players who excelled at the World Cup and it was two of them who handed Spurs all three points at Newcastle.

Vertonghen and Alli struck either side of Joselu’s equaliser for the Magpies with all three goals coming in the first 18 minutes.

“It is important to be strong from the beginning and have belief and convey a positive message,” Pochettino said.

“It is important the fans know the players need their help.”

All three of last season’s top-six sides in action so far have been victorious as Manchester United opened their campaign with a 2-1 win over Leicester on Friday.

But there was no instant return on that investment as Jeffrey Schlupp and Wilfried Zaha scored either side of half-time to give Palace a 2-0 win at Craven Cottage.

Roberto Pereyra scored twice as Watford were too good for Brighton.

Bournemouth were also comfortable victors over promoted Cardiff thanks to goals from Ryan Fraser and Callum Wilson.