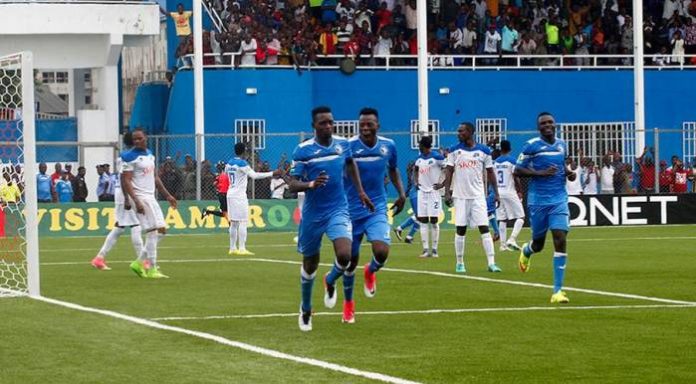 The Aba elephants lost their Group D opening match with Hassannia Agadir a week ago in Agadir in Morroco which left the team at the bottom of the group.

Enyimba however, defeated the Cote D’Ivoire side with a lone goal after struggling very hard to stave off the visitors’ pressures from scoring them.

Enyimba’s winning goal came through Martins Usule (9) in the 64th minute after the striker replaced Sampson Obi (7) who had an unrewarding day resulting in his removal in the second half.

The Coach Usman Abd’Allah’s side’s victory over FC San Pedro lifted them to the second position in Group D from the bottom position they had occupied last week following their earlier loss to the Moroccan side.

In a post match press conference held at Enyimba Stadium, Abd’Allah, said he was happy his team got the three points at stake notwithstanding their poor performance.

The coach said that CAF’s fixing of the match for 2 p.m and injuries sustained by some of his boys were responsible for their poor performance on Sunday.

He promised that the team would improve its performance on time to qualify them for the finals.

Enyimba’s Captain, Ifeanyi Anaemena said that the first half performances of Enyimba which fans complained about in Morocco repeated in the match against San Pedro because of injuries and fresh players.

He promised that the team would work harder to improve their overall performances to be able to meet future expectations in the competitions.

Anaemena confirming the gravity of the injury that led to his removal from the field Sunday said that doctors have told him he would need two to three weeks to recover fitness to play again.

He noted that getting three points in the match after their poor performance in the first half was important as points are key in a group competition.

The goal scorer, Martins Usule said he was delighted to have helped the team gain three points stressing that although he trained hard, God was the reason for his improved performances.

Meanwhile, Enyimba FC Chairman, Felix Anyansi-Agwu, said the fixing of Sunday’s match by CAF for 2 p.m was not in any way the making of his team.

He said that Enyimba stadium floodlight had undergone improvements enough to support playing on the turf by 8 p.m stressing that the time affected both the players’ performances and poor turn-out of spectators.

The Coach of FC San Pedro, Khemaies Labidi, during the conference said his team played very well stating that as young players, there was still room for improvement.