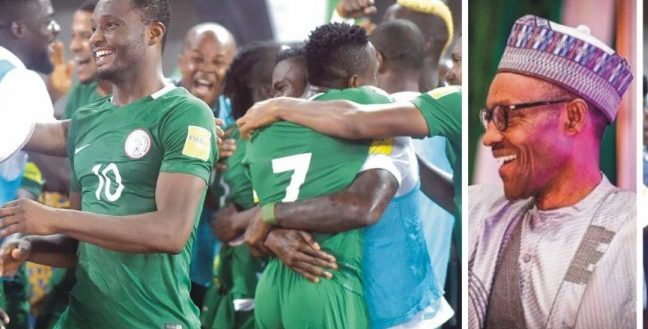 President Muhammadu Buhari has congratulated the Super Eagles of Nigeria for making progress in the ongoing African Cup of Nations in Egypt, after a delightful win over the Indomitable Lions of Cameroon.

In a statement by the Special Adviser on Media and Publicity, Mr. Femi Adesina, in Abuja on Saturday, Buhari acknowledged the hardwork, team spirit and sportsmanship the Eagles had exhibited in the tournament.

The president said such virtues were good signs for a team destined to excel, but added however, that there were more hurdles to scale before lifting the trophy.

He urged the team and their handlers to remain focused and determined and assured them of the fervent prayers and support of all Nigerians.

Nigeria ousted holders and bitter rivals Cameroon from the 2019 Africa Cup of Nations as they scored twice in three minutes to come from behind to win a thrilling last-16 match 3-2 on Saturday.

Odion Ighalo gave Nigeria a 19th-minute lead but Cameroon hit back with two goals in quick succession before halftime from Stephane Bahoken and Clinton Njie to take a 2-1 lead.

Ighalo levelled again for Nigeria in the 63rd minute amid suspicions of offside before Alex Iwobi snatched the winner for the jubilant Super Eagles three minutes later.

The win earned Nigeria a quarter-final against hosts Egypt or South Africa who play later on Saturday.