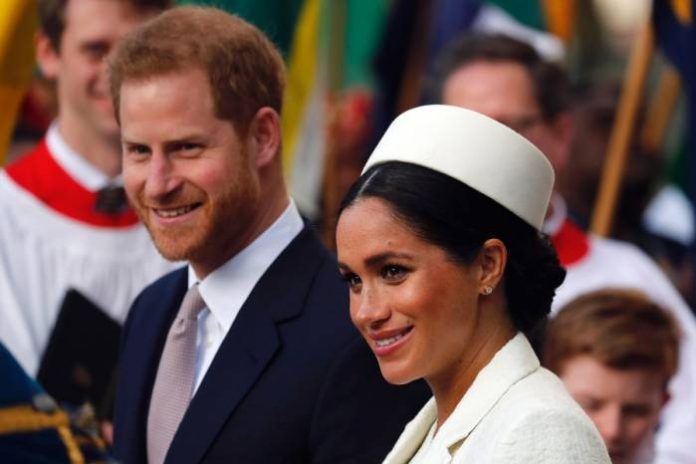 Prince Harry and his American wife Meghan will no longer be known as “royal highnesses,” surrendering their top titles in another break with their lives as servants of the crown, a palace statement said Saturday.

They will also repay millions spent on renovating their mansion, as the couple step back from their royal duties and begin to split their time between Britain and Canada.

The announcement of a new deal for Harry and Meghan both giveth and taketh away.

The couple win their freedom from a palace-centric life of duty serving the queen as “senior working royals,” which they found suffocating — especially the intense, often harsh media coverage.

But in exchange, they give up the “HRH.”

The Washington Post explained that “This means that Harry and Meghan’s titles will be pruned back.”

When Princess Diana and Sarah, the Duchess of York, divorced their royal husbands, they, too, lost their HRH titles.

It seemed clear that Harry and Meghan wanted to keep at least some part of their titles — and hardly surprising given that they use “Sussex Royal” on their Instagram, website, and are reportedly trying to register that as part of a global trademark.

On their new website, SussexRoyal.com, Harry and Meghan included a question-and-answer on titles in the “funding” section of their site.

READ ALSO: Harry, Meghan To Step Back As ‘Senior’ Royals

They may have been referring to people like Harry’s cousin Beatrice, or “Her Royal Highness Princess Beatrice of York,” who works in finance.

Harry and Meghan announced they will repay $3 million in British taxpayer funds that was used to refurbish their home near Windsor Castle, a 5-bedroom, former fixer-upper known as “Frogmore Cottage.”

Polls have shown that the majority of Britons are in favor of the couple giving up their life as full-time royals, but they did not want the taxpayer picking up the tab.

They will also give up the salaries they received to perform as senior working royals.

The loss of top titles was expected.

He will continue on as Prince Harry and the two will still be known as the Duke and Duchess of Sussex, titles awarded to the couple by the queen on the occasion of their wedding.

Other questions remain unanswered, including what the couple’s tax and immigration status will be in the Britain and Canada. It is also unknown where they will live in Canada and who will pay for their security.

Buckingham Palace said it does not comment on the details of security arrangements. “There are well established independent processes to determine the need for publicly-funded security,” it said in a statement.