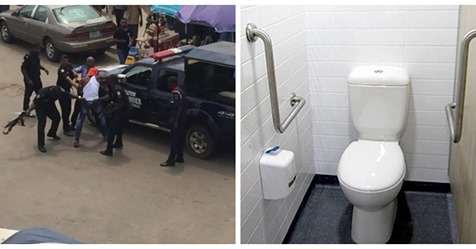 An Igbosere Magistrates’ Court in Lagos has ordered that a 16-year-old boy, who allegedly hid in a bank toilet overnight and stole N340,000, be remanded in a juvenile corrective centre.

The teenager (names withheld) of Abimbola Street, Even Estate, Ajah, Lagos was arraigned before the court by the Ajah Police Division, Lagos, on a one-count charge of stealing.

Prosecuting counsel, Insp. Peace Chukwudi told the court in a charge marked C/09/2020 that the defendant committed the offence on February 19.

She alleged that the defendant was caught by security officials in the banking hall of a branch of First City Monument Bank (FCMB) and upon interrogation, the boy confessed that he gained entry into the bank just before 4pm, during closing time rush hour.

He went to the toilet and hid until everyone left for the day.

The court heard that the boy ransacked the workers’ safe at about 2:30 am, found the sum of N340,000 and concealed it in his clothes.

He tried to sneak out of the banking hall but was spotted and arrested by the bank’s guards.

The offence, according to Chukwudi, was punishable under Section 28 of the Criminal Law of Lagos State, 2015.

The defendant however, pleaded not guilty.

The Magistrate Doja-Ojo remanded him at the Oregun Juvenile Corrective Home, Ikeja and adjourned till April 15 for facts and sentencing.