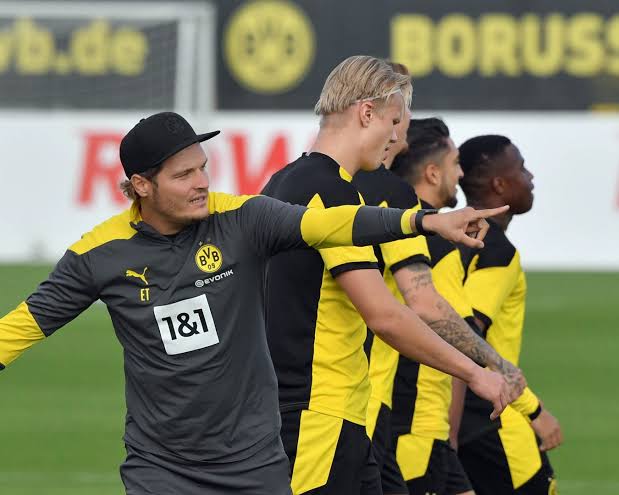 Borussia Dortmund said on Friday they have parted ways with coach Marco Rose after just one year, with media reports immediately saying Edin Terzic could return to take his place.

Borussia Dortmund are the fifth Bundesliga club in need of a new helmsman within the past six days.

Borussia Dortmund went out early in the UEFA Champions League and the German Cup.

They said the decision to dismiss Rose was made in a season-ending analysis, involving him and top officials led by chief executive officer Hans-Joachim Watzke, on Thursday.

“The day was not an easy one for all of us, as we have all held each other in high regard and continue to do so.

“After a season that was unsatisfactory for various reasons, we were forced to conclude that we did not achieve the maximum possible in many areas,” Watzke said.

Rose, on his part, said: “In spite of a difficult season with many uncertainties, I was convinced by our path.

“During our discussion, I developed the impression there was no longer a 100 percent conviction among all those responsible. We therefore ultimately decided together to end the cooperation.”

Rose’s departure at Borussia Mönchengladbach last year set an extraordinary merry-go-round at the helm in motion, with Adi Hütter joining from Eintracht Frankfurt.

Oliver Glasner took over at Eintracht Frankfurt in a move from Wolfsburg, with Julian Nagelsmann going to Bayern Munich from RB Leipzig.

Nagelsmann and Europa League winner Glasner are the only ones still in charge, with Hütter and Borussia Mönchengladbach parting ways on Saturday, and Jesse Marsch long out at RB Leipzig.

Kohfeldt had to go a few days ago along with Hütter, while Hoffenheim’s Sebastian Hoeneß followed in mid-week.

Markus Weinzierl resigned at Augsburg, and Rose is now the fifth man out in six days since the season finale.

Rose last year took over from Terzic who was made interim coach following the autumn 2020 departure of Lucien Favre.

Former assistant coach Terzic achieved stability by leading Borussia Dortmund into the UEFA Champions League and winning the German Cup with them in his final game in charge.

Popular Terzic was made technical director and it is being speculated he would now return to the coaching bench and become Rose’s successor.

The deal is expected to be announced at the weekend.

But there was no confirmation however from Borussia Dortmund who only said that there would be talks on the issue “over the coming days.”

Borussia Dortmund are meanwhile aiming for a serious title challenge next season.

For that, they have already signed three German international players — forward Karim Adeyemi and defenders Nico Schlotterbeck and Niklas Süle.

But they have lost star striker Erling Haaland to Manchester City and midfielder Axel Witsel has also left.(dpa/NAN)