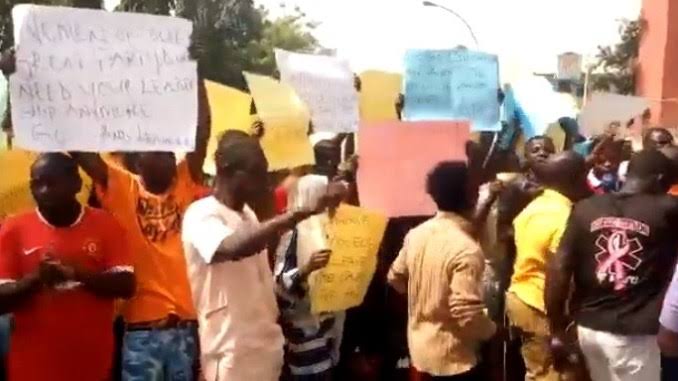 The APC Deputy National Publicity Secretary, Mr. Yekini Nabena, who issued a release on the matter on Wednesday, said APC had no hand in the protest.

Calling on the public not to allow itself to be fooled by the PDD, Nabena insisted that the opposition party, alongside a governor from the geo-political zone were behind the protest.

He said the action of PDP was to portray the Bayelsa APC Governorship candidate, David Lyon and his supporters in bad light.

Recall that the apex court had in a judgment on February 13, voided the electoral victory of Lyon in the November 16, 2019 governorship election in Bayelsa on account of his deputy submitting forged certificates to the Independent National Electoral Commission (INEC).

The lead judgment was delivered by Justice Mary Peter-Odili.

Condemning the protest, Nabena called on the judiciary to ignore the PDP’s antics and always side with the will of the people and rule of law in all matters.

The statement read in part: “Nobody should be fooled by the usual antics of the PDP. Resort to extra-judicial tactics such as maligning the Judiciary and its officials is the PDP’s stock-in-trade. The same hired urchins the PDP Chairman, Uche Secondus has used for his senseless protests to the embassies of the UK, US and the European Union were used for Tuesday’s protests at Justice Odili’s residence.

“The Rivers State Governor, Nyesom Wike aside being the main financier of the PDP must explain his inexplicable interest in the Governorship of Bayelsa state. The people of Rivers state must begin to ask their governor how and what he uses their money for.

“The APC National leadership is already pursuing all legal avenues to contest the decision of the Independent National Electoral Commission (INEC) to declare Duoye Diri as Bayelsa Governor, having failed to meet the mandatory constitutional requirement to become the governor.

“Also, our leaders have already told our supporters to avoid violent confrontations while legal avenues are sort to review INEC’s unconstitutional decision. Our people have listened and are confident our judicial system will ensure that the people’s will and justice is done.”