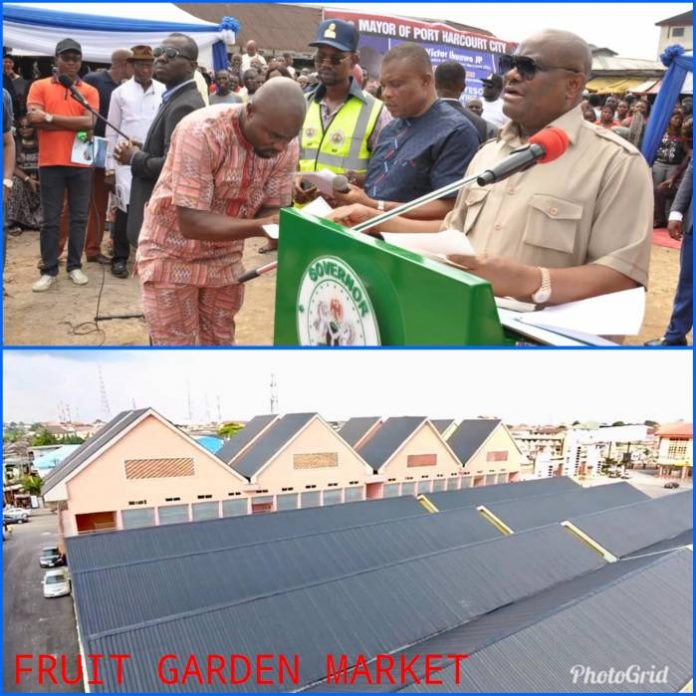 The Popular Fruit Garden Market in Port Harcourt was gutted by fire towards the end of 2018. Therefore, it became a tool for politics and campaign. Several politicians rushed to the market to make empty promises. They exploited the situation of the Traders.

Unlike the other politicians, Governor Nyesom Wike empathised with the traders. On the night of the fire, Wike personally rushed to the scene and coordinated rescue and response operations.

The following day, he was back to the market to assure the traders that he will be with them all through the way. He said that he would ensure that they pick up their lives. The Traders said that they had faith in him to keep his promise. After all, his politics is built on keeping his pledges.

Days after, governor approved the construction of the Fruits and Vegetables Market in D/Line, which was gutted by fire.

The governor also approved the release of compensation to traders who were affected by the inferno at the market.

On October 27, 2018, the Rivers State Government flagged off the construction of the Fruit Garden Market. The foundation stone was laid by the Ebonyi State Governor, Mr. Dave Umahi.

On that day, he redeemed his pledge to compensate traders of the burnt market in Port Harcourt as he handed over bank drafts to them.

Governor Wike released bank drafts of N400,000 (Four Hundred Thousand Naira) compensation to each of the 213 Traders operating inside the market.

The governor also released of N300,000 (three hundred thousand Naira) bank draft each to 200 other traders operating around the market.

He said: “Today, Government will compensate you, so that you can pick up your lives. We have the bank drafts because we don’t want you to be targeted by criminals. Go to the banks, open accounts and expand your businesses.”

The Fruit Garden Market was constructed from the ruins of the fire disaster to an excellent commercial centre. The market is now an architectural masterpiece.

The new Fruit and Vegetables Market has four buildings (one storey each) and eight buildings (bungalow), designed to promote commercial activities. Other facilities in the market include: 160 Open Stalls, 72 lock up shops, toilet blocks, car park, drainage, internal roads, a warehouse, generator, transformer, perimeter fence and a security house.

When the governor unveiled the Rumuwoji Market, some critics wondered why the State Government would be involved in developing Markets. They conveniently forgot that it was the immediate past APC Administration that pledged to rebuild that market and failed the people. When he delivered the Rumuwoji Market, the professional critics wanted to play down its importance to the economic development of the state.

The Fruit Garden Market is way beyond the physical structures as displayed. It is the revival of the sources of livelihood of hardworking residents of Port Harcourt, irrespective of their states of origin.

The Fruit Garden Market represents the use of governmental authority to give hope to the people. If Governor Wike had turned his back on the traders, majority of them would have lost out. He empowered them and reawakened their businesses.

The market is the standing monument of practical governmental love to the less privileged. It is a proof that Governor Wike uses the people’s mandate to advance public good.

On April 6, 2019, more than any other time, the traders of Fruit Garden Market showed that they understood the enormity of Governor Wike’s developmental projects. They struggled to present their gifts to Governor Wike. The symbolism of their gesture was not lost on the Rivers State Governor.

After that project inspection at the Fruit Garden Market, the market women displayed their appreciation. Senator Mao Ohuabunwa who was with the Governor at the occasion said the celebration by Rivers people was democracy in action.

He said: “You can see how happy I am. This is democracy in action. I don’t think there is a better way to appreciate the people than to do projects that will touch their lives.

“You can see the outpouring of love, genuine love. You can see along the road, people came out, market women, taxi drivers, children applauding and appreciating the governor for the good job he is doing.

“This shows that Rivers State is in God’s hands and in safe hands. I can say categorically that Rivers people are happy.”

At the Fruit Garden Market, Governor Wike reiterated his commitment to Rivers people, declaring that he will never take their support for granted, and promised to continue to work to improve their lives.

He said: “I will never relent in what we are doing for the people. We will never take the support of Rivers people for granted. I will continue to work towards improving the lives of the people.”