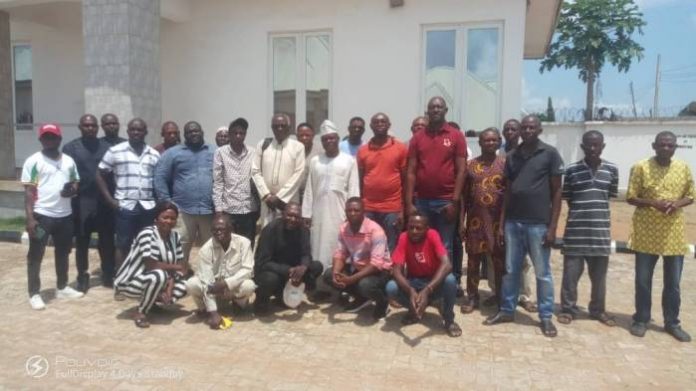 Ahead of 2023 governorship elections, Social Democratic Party, SDP, in Benue state has formed an alliance with Labour Party, to enable its candidates, Herman Hembe, emerge victorious.

The state chairman of SDP, Engr John Enemari, said the entire executive of the party has thrown its weight behind Labour Party in Benue State and has also directed all party chairmen in the 23 Local Government Area, its executives at the 276 wards and members to support Labour Party.

Enameri who stated this at a news conference in Makurdi, charged them to go and build labour party and support its candidates for good governance and the revamping of the socioeconomic fortunes of the people in Benue state.

According to him, “the man that is coming is a young man that has done very well in his constituency. This is his fourth time at the National Assembly. At the House of Representatives, once you mention his name, they will tell you they know him. My people are going to work with Labour Party to support Hembe.”

He noted that the crisis at the national level has destabilize everything SDP in all the states of the federation saying “we cannot continue to suffer for them at the national office, particularly Benue SDP, we suffered for the party in 2018/2019.

“The national office reaped closed to N100 million from Benue SDP, in 2018 and not one kobo was sent back to us to work for the party,” saying it was against their constitution.

“By the party constitution we were suppose to get not less than N75 million from the sales of forms in accordance with section 72(2), but these people in Abuja sat on it.

“In a party if you don’t win election, what do you do. Now they are in court, let them continue, Benue is not a revenue yielding state for them. Benue needs good governance and we in SDP cannot remain idle, we must work with those with integrity to deliver the state.”

Speaking further, Enemari said he consulted with the All Progressive Congress, APC, Peoples Democratic Party, PDP, but noted that while one was trailed with legal issues, the other had integrity issues.

“Since we did not have a governorship candidate we have decided to give our full support and ensure that Labour Party’s Herman Hembe wins in Benue state as he is capable of salvaging the state from the infrastructural deficit and failed promises.

He called on Benue public to join Labour Party as it is the party that can rebuild Benue and take her out of the woods.