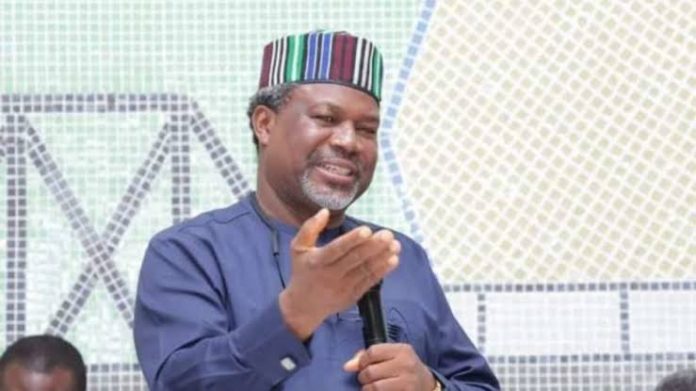 Ahead of preparations for the 2023 general elections, some groups and governorship aspirants on the platform of the People’s Democratic Party, PDP, in Benue State, have kicked against the emergence of Speaker, Benue State House of Assembly, Mr. Titus Uba, as the consensus candidate of the party.

The Next Edition reports that Mr. Uba emerged the consensus candidate to fly the flag of the PDP ahead of 2023 Benue gubernatorial election during a meeting of G-14, Sunday April 17, 2022, after the leadership of the party and co-aspirants, allegedly, unanimously resolved to throw their weight behind his candidature and project his policies and blueprint to the Benue people.

G-14 refers to PDP stakeholders from the 14 local government areas of the Tiv speaking areas in the state.

Determined to retain power in the 2023 general elections in Benue State, the 32 gubernatorial aspirants from the 14 Tiv speaking local government areas, after a painstaking process, had endorsed the Benue Speaker after he was selected by the Kunav leaders of Vandeikya local government and accepted by both the Sankera, Jemgbagh and MINDA political elders.

The gubernatorial aspirants took the unanimous decision following serries of stakeholders meetings involving mediations by the Benue State Governor, Samuel Ortom and other leaders of the party in the state.

At the meeting, Chairman of the PDP Governorship Aspirants Forum, Barrister Chille Igbawua was said to have acknowledged that though the process was tedious, they had accepted the choice of Uba as presented by the people of Kunav.

However, days later, events have taken a reverse turn as groups and some aspirants have voice their rejection of the arrangement saying it does not reflect the true stance of the people.

A former Director General, Standard Organisation of Nigeria (SON), Paul Angya has long distanced himself from the arrangement of the PDP that brought about the emergence of a consensus candidate for the party in the state.

Angya, a PDP gubernatorial aspirant insisted that the process that led to the emergence of the Speaker, Mr. Titus Uba as the consensus candidate of the party from the Tiv speaking areas lacked transparency as well as merit and does not reflect the popular will of the people of the state.

In a statement signed by his Media Coordinator, Clement Tsar, and made available to journalists in Makurdi on Wednesday, the aspirant called on the party leadership to adopt a democratically acceptable approach for the emergence of a flag bearer for the PDP.

The statement read in part, “After a careful review of the process that produced the “consensus” candidate in Benue state, Dr. Paul Angya has rejected in strong terms the PDP governorship selection arrangement.

“The process that produced the “consensus'” candidate in Benue state is dishonest, not transparent, lacks merit, not in tandem with the relevant sections of the electoral act as amended and does not reflect the popular will of the people.

Angya said he has worked hard to earn the confidence of the PDP delegates in the state who are patiently waiting to queue behind him during the party primaries, therefore, he cannot afford to disappoint them by associating himself with the result of the illegal arrangement.

Also, a group agitating for power shift in the state, Benue Rebirth Movement, BRM, has strongly rejected the arrangement that brought the Speaker as the consensus candidate of the party.

The group through their National Coordinator, AVM Monday Morgan, rtd, accused Governor Samuel Ortom and the PDP of working against the interest of the people of Zone C, Benue South comprising majorly of Idoma and the Igede speaking people.

The Next Edition had reported that the people of Zone C adopted the incumbent Deputy Governor, Benson Abounu as their candidate with the hope that the party will lead all aspirants through a process of governorship primaries ahead of 2023 Benue guber poll.

The movement therefore stated that presenting Uba as Zone A and B’s candidate for governor was a deliberate attempt to scuttle the chances of a Zone C person becoming the state Governor next year.

“To say the least, we in BRM also consider the process of the purported selection of Rt. Hon. Uba as a ruse designed to frighten zone C into abandoning its Gubernatorial aspiration. It is like rubbing pepper in the 46-year-old ethnically motivated political wound inflicted on the people of zone C.

“We consider it inappropriate for Governor Ortom who is the leader of PDP in Benue state and father to all to publicly take a definite position against Zone C and openly align himself with the aspiration of Zone A.
“We reject completely the deployment of virtually the entire state PDP machinery by the Governor to the pursuit of a Tiv ethnic agenda. We reject the situation whereby well-established party structures would be replaced overnight with an illegal body known as the “caucus for the Tiv speaking area” for the purpose of picking the party’s candidate for election.

“The Governor’s roles are prejudicial and against the principles of equity, fairness and justice. This is inimical to the credibility and integrity of any process for the selection of the consensus Governorship candidate at the state level in which the Governor is supposed to play a neutral, fatherly role.

“We are resolved to take advantage of the scheduled primary elections of the political parties to achieve our goal. We, therefore, challenge the PDP leadership in the state to provide a level playing field for free and fair primaries. We are confident that a zone C candidate, specifically, Engr. Benson Abounu, will win clean and square.”

The group therefore called on the people of zone C and their teaming supporters to remain calm saying “This is not the time to give up or chicken out. It is the time to roll up our sleeves and brace up for more action. It is a time to be more united, committed and focused than ever before. We have never come closer to actualizing our governorship aspiration than now and we are not about to surrender for whatever reason.

Governor Ortom has however debunked the claims by BRM that he hates the Idoma people and would not want them to be elected into office as governor of the state.

Ortom said the allegation is spurious and far from the truth, particularly as it relates to the 2023 governorship election in Benue state.

He explained that since 2015 when he came to office, he has continued to promote the unity of the state with accentuated vigour which is also displayed in the now famous ‘Unity Cap’ which he uses to preach peace and unity among all ethnic nationalities in the state and Nigeria in general.

The idea behind this is to show that Benue is for all and not just for the Tiv alone as the AVM Monday Morgan’s Benue Rebirth Movement, BRM wants the public to believe.

“It is on record that Governor Ortom had counselled the leadership of the Benue Rebirth Movement to reach out to their Tiv brothers to canvass support across all political parties, and not just in the People’s Democratic Party, PDP for the purpose of an Idoma son or daughter to be elected as Governor of the State. That way, Governor Ortom believes there will be a singleness of purpose and approach for our Idoma brothers to have a level field of contest.

Speaking on behalf of his boss, Chief Press Secretary, Nathaniel Ikyur said, “We advise the Benue Rebirth Movement to do more homework by building trust and confidence with their Tiv brothers in their quest and not to turn and make Governor Ortom an issue in their contest for the governorship of the state. Governor Ortom is not against an Idoma man becoming the governor of the State. It is a process that involves everyone.