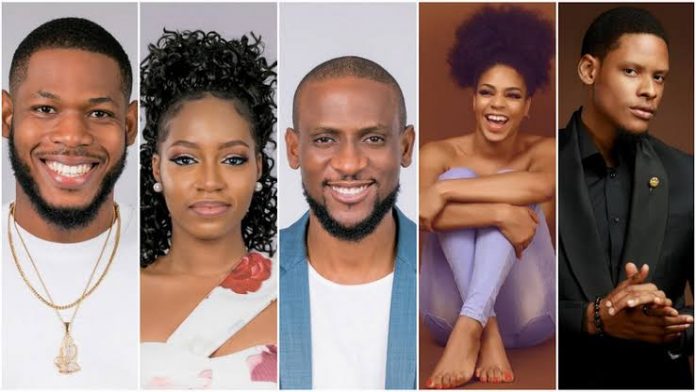 They are Frodd, Omashola, Venita, Elozonam and Khafi.

Big Brother had switched off nomination process before the live show Monday evening by informing housemates that nominations would be done individually and no longer as a group.

His announcement unsettled many housemates who had one or more issues with one another during the course of the week. Individual nominations are always an opportunity for housemates to use and settle personal scores, which might have accumulated for weeks since the introduction of group challenge for nominations.

To live up to the dictates of their heads, the nomination process witnessed a lot of housemates putting one another up for flimsy excuses. Some housemates explained to Biggie during the Diary session how so so and so had crossed some sensitive lines and therefore deserved to be put up. Instead of using competition as basis for nominations some used previous quarrels as a guide.
As usual, housemates were called to the diary room to nominate two of their colleagues and those with the highest mentions were put up for possible eviction.

See how the housemates voted below:

Khafi who did not have enough nominations to be up for possible eviction was eventually put up by Seyi who used his veto power to do the serve and replace.