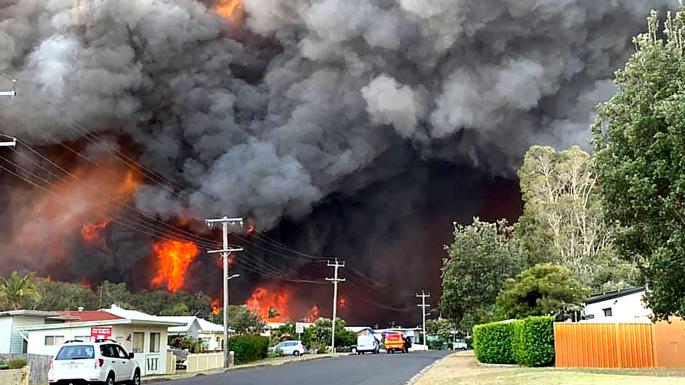 More than 90 blazes were raging across the state on Friday.

Gusty winds and up to 35C heat have exacerbated the fires, many of which are in drought-affected areas.

There are reports of people trapped in their homes in several places, with crew unable to reach them due to the strength of the fires.

“We are in uncharted territory,” said Rural Fire Service Commissioner Shane Fitzsimmons. “We have never seen this many fires concurrently at emergency warning level.”

At one point, 17 emergency-level fires were burning simultaneously across NSW.
Authorities have deployed more than 1,000 firefighters and 70 aircraft to save “as many people as possible”, Mr. Fitzsimmons said.

The Rural Fire Service tweeted on Friday that “due to the size and speed of the fires we couldn’t get to everyone, even by road or helicopter”. The blazes are spread across about 1,000 km (621 miles) of Australia’s coast, stretching the emergency response.

Some people were warned to seek shelter from fires rather than flee, as it was now too late to leave.

Emergency warnings were also issued on Friday for bushfires burning in Queensland and Western Australia.

In NSW, the worst-hit state, crews have fought hundreds of fires since September. Last month, two people died while trying to protect their home.

Last week, one blaze burnt though 2,000 hectares of bush which contained a koala sanctuary. Hundreds of the animals were feared to have died.