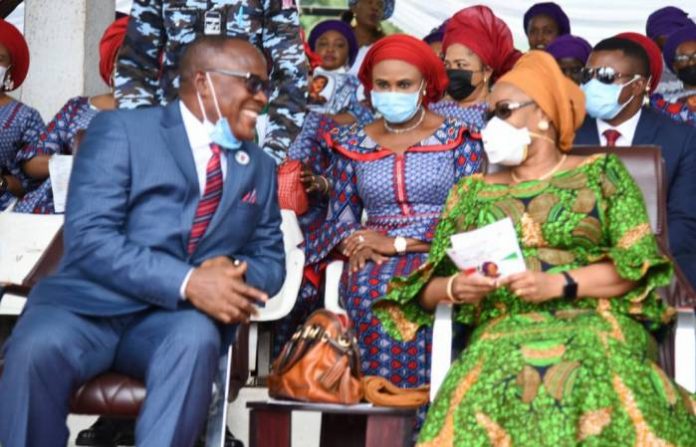 Gov. Ifeanyi Ugwuanyi of Enugu State has commended women of the state for the noble roles they played in the development of the state in particular and the nation in general.

Ugwuanyi made the commendation during the flag-off of the 2021 August Meeting for women held at Michael Okpara Square, Enugu, with the theme: “Women and children must be protected as a bedrock of our community.”

Ugwuanyi, represented by the Secretary to the State Government, Prof. Simon Ortuanya, said that women, worldwide, had contributed immensely in the development of the society.

He added that his administration at its inception recognized the pivotal roles played by women in the initiation and effective implementation of government policies and programmes.

The governor pointed out that it was in recognition of the above that Enugu State had the first female Deputy Governor as well as the first female Chief Judge of the State, in the persons of Mrs. Cecilia Ezeilo and Justice Priscilla Ngozi Emehelu, respectively.

The governor disclosed that four women were elected as members of the State House of Assembly with three serving as Principal Officers of the House, adding that his administration appointed women as Commissioners for Gender Affairs and Social Development, Finance, and Special Duties.

He, therefore, reiterated the state government’s commitment to continue to partner women in all sectors of development for the common good of the people of the state.

Gov. Ugwuanyi commended his wife, Mrs. Monica Ugwuanyi, for the laudable roles she played through her pet project, Ugo’s Touch of Life Foundation (U-TOLF) and other children/women intervention and emancipation programmes.

The governor maintained that the annual August Meeting was timely and a veritable platform for women to unite, reflect and interact on development issues as well as proffer solutions to the challenges confronting them in particular and the society in general.

He urged them to utilize the unique opportunity the gathering provided to chart a new course for their wellbeing, their families and the society at large.

In her speech, the Governor’s wife, Mrs. Ugwuanyi, emphasized the need for women to take their rightful positions in the scheme of things in the state in particular and the country in general.

Mrs. Ugwuanyi charged the women to always endeavour to upgrade their cherished sterling qualities, such as education, humility, intelligence, good home management, community leadership, among others.

She advocated for girl-child education, which she said, liberated the society from the shackles of poverty, ignorance, enslavement, diseases and other problems.

The governor’s wife advised parents especially mothers to protect their children from Sexual and Gender based Violence (SGBV) during the long holidays and ensured that they were in safe hands at all times.

She expressed delight that the Gov. Ugwuanyi administration recognized the roles of women in governance as evidenced in the emergence of the first woman Deputy Governor and first woman Chief Judge, among other enviable positions in the state.

Ezeilo, a professor of law, listed them to include breaking the culture of silence by reporting cases without stigmatization, awareness creation of law prohibiting SGBV, outreaches to schools, traditional and religious leaders, among others.

She expressed satisfaction that the Enugu State Violence Against Persons Prohibition (VAPP) Law covered most prevalent forms of violence especially SGBV and pledged that WACOL would continue to ensure its implementation by providing free legal services and succor to victims.

Earlier in her remarks, the Commissioner for Gender Affairs and Social Development, Princess Peace Nnaji, thanked Gov. Ugwuanyi and his wife for signing the Child Rights Act into law and their tenacity towards the fight against gender-based violence in Enugu State.

Major highlights of the event also include a march-past by women from the 17 LGAs and inspection of farm produce from the council areas by Mrs. Ugwuanyi. (NAN)