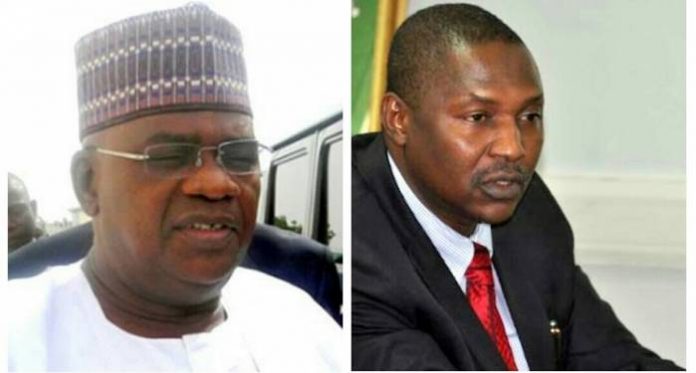 The Attorney General of the Federation and Minister of Justice, Abubakar Malami (SAN), said on Friday he decided to withdraw the N25bn fraud case against Senator Danjuma Goje, because the case against him was weak.

Recall that the anti-graft body had withdrawn the fraud charges against the lawmaker shortly after he withdrew from the race for the Senate Presidency in 2019 and instead endorsed Ahmed Lawan, the preferred candidate of President Muhammadu Buhari and his political party.

Recall also that Transparency International had referred to the Goje incident in the recent rating of Nigeria on the corruption perception index.

Speaking through a statement signed by his spokesman, Dr. Umar Gwandu, on Friday, Malami said it was within his constitutional rights to withdraw any criminal case at any time.

The statement read in part, “As to the allegation of withdrawal of the corruption case of N25bn against former Gombe State Governor, Senator Danjuma Goje; the first point of correction is that the AGF did not withdraw a N25bn case.

“The EFCC had filed a 21 charges of N8bn against Senator Goje and had been prosecuting same for over eight years without the AGF’s interference but after a no case submission filed by Senator Goje, 19 of the 21 counts making up the N8bn were struck out by the court leaving only two counts bordering on the manner in which the sale of some old buses belonging to Gombe State Transport Company between 2003 and 2011 were handled under the watch of Senator Goje.

“It was the said last two counts that the AGF thoroughly reviewed in 2019 and having found no prima facie case, withdrew in exercise of his constitutional power pursuant to Section 174 of the 1999 Constitution.”