Friends and colleagues have expressed shock and sadness over the sudden demise of Senator Buruji Kashamu on Saturday.

Among those who took to the social media to mourn the late Senator are former Vice president, Atiku Abubakar, former senate president, Bukola Saraki and former Aviation minister, Femi Fani-Kayode.

Below are some their reactions:

Atiku Abubakar: “I pray that the Almighty Allah forgives his sins and grants him a place in Aljannah Firdaus….🙏” 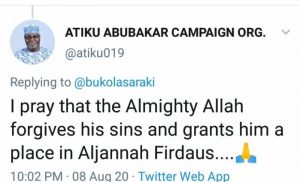 Sen. Bukola Saraki: “I commiserate with the Kashamu family, PDP members across the South West Zone, and the government and people of the Ogun State over this great loss. I pray that the Almighty Allah forgives his sins and grants him a place in Aljannah Firdaus.

“I am devastated to receive the sad news of the passing away of my former colleague and friend, Senator Buruji Kashamu. He was a kind and compassionate man, always ready to make himself available in support of any of his colleagues. With this attitude, he won the hearts of many.” 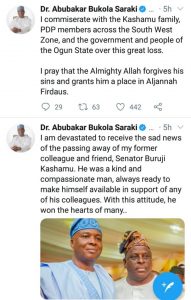 Former Aviation Minister, Femi Fain-Kayode tweeted: “Shocked and saddened to hear about the passing of my friend and brother Senator Buruji Kashamu as a result of Covid 19. May the Lord honor and reward him with a place in heaven & may He forgive him of all his sins. RIP my old friend. You fought a good fight & we shall miss you.” 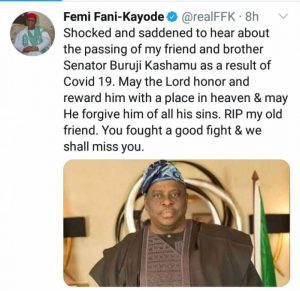 Sen. Ademola Adeleke: “*INALLILAHI WAHEENA ILEHI ROJIHUNA*!!!
“The news of the death of Senator Buruji Kashamu is shocking and painful. Senator Kashamu was a good friend, who will be solely missed by many people. May Allah be merciful to him and grant him Aljanah Fridaus. 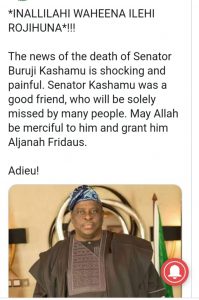 Kashamu died on Saturday from COVID-19 complications after being admitted at First Cardiology, Hospital, Lagos.