Vice Chairman APC Presidential Campaign Council Senator Godswill Akpabio, has said that he would approach the highest court in the land to seek redress on the Appeal Court judgement which nullified his election as the APC candidate for Akwa Ibom North West Senatorial District.

He also advised his supporters, party members and all his constituents to “remain calm and law-abiding, as they continue their campaigns for the successes of the APC in Akwa Ibom North West, Akwa Ibom State and the Nigeria at large.”

In a statement personally signed by the former Minister of Niger Delta Affairs and made available to newsmen, Akpabio said,” my attention has been drawn to the judgement delivered by the Court of Appeal Abuja Division, directing the INEC to delist my name from their list as the APC senatorial candidate for Akwa Ibom North West Senatorial District in the forth coming 2023 elections.

“It is instructive to mention that I was not a party in the said Appeal though Orders were made against me and my interest.”

READ ALSO: Step Down In The Interest Of The Party, PDP Senatorial Candidate Tells Ayu

He stated further that, ” whilst awaiting a copy of the said judgement to be made available to me and any other interested party, it is important to state that I am a Lawyer by training and a law abiding citizen of this country and I am bound by our laws and judgements emanating from our courts including the one under reference.

“My Lawyers on my advice and brief have commenced the scrutiny of the contents of the judgement as read, for the purposes of seeking appropriate legal redress.

“I am aware that the Supreme Court of Nigeria has the final say in these matters. I therefore, strongly advise my supporters, APC members and all my constituents to remain calm and law abiding, as they continue their campaigns for the successes of the APC in Akwa Ibom North West Senatorial District, Akwa Ibom State and Nigeria at large.” 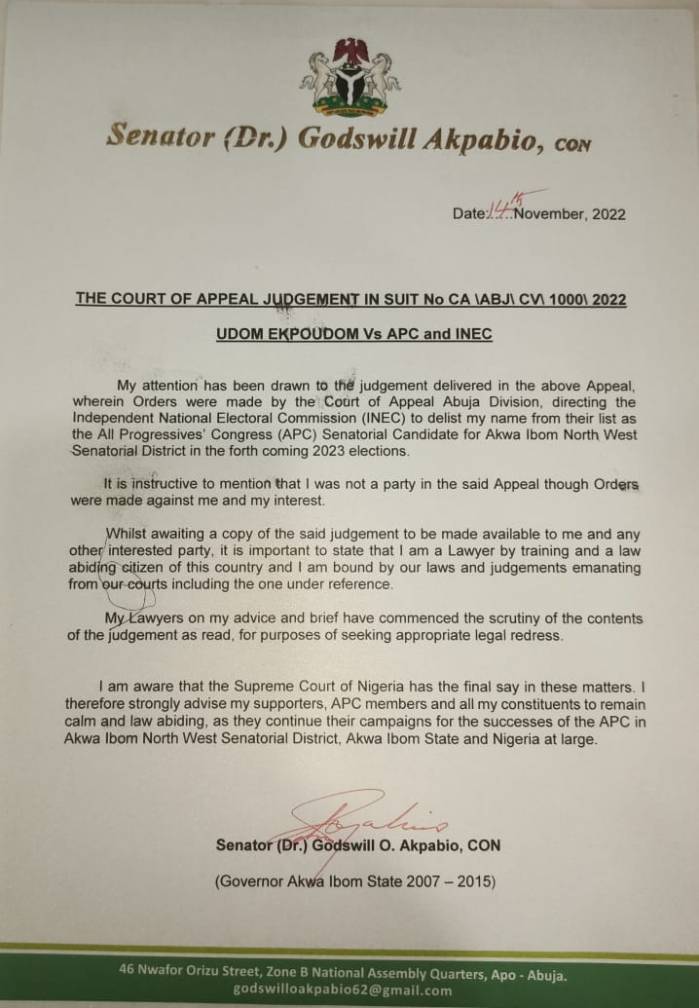