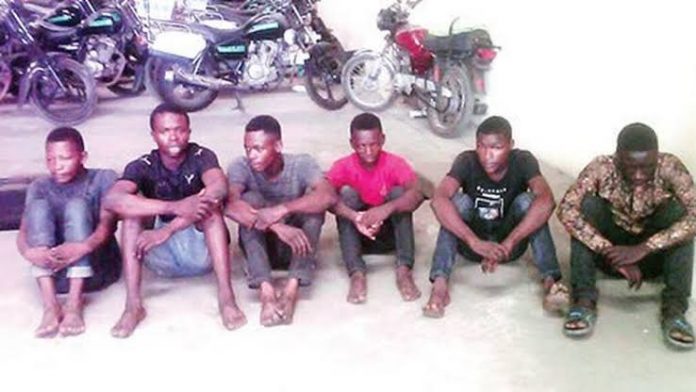 The Police Command in Anambra said it arrested 85 cult suspects and recovered dangerous weapons and other incriminating items between August 10 and August 18, 2019.

The Commissioner of Police in the state, Mr. John Abang, said this on Monday, while parading the suspects before newsmen in Awka, NAN report says.

He said that 29 suspects were still undergoing investigation, 10 underaged placed under police supervision, while 10 were charged to court.

The police boss said that some of the suspects confessed to be members of Aiye confraternity who came from different states in the South-East for initiation before they were arrested.

“From all the raids carried out, we recovered six machetes, three berets, three improvised bunkers for inhaling substances suspected to be cocaine, three axes, one dagger, one sword and some quantity of weeds suspected to be cannabis sativa,” he said.

He said that the command launched an offensive against the suspects to stem the rising wave of cult activities in Awka, the state capital.

Abang said that in the wake of the onslaught, the command arrested four alleged sponsors and members of Black Axe and Vikings confraternities.

He claimed that the four were allegedly behind the recent cult-related attacks in Awka.

He said that the suspects would be arraigned at the end of the ongoing investigations.

He said that the arrest led to further arrest of five other armed robbery suspects.(NAN)