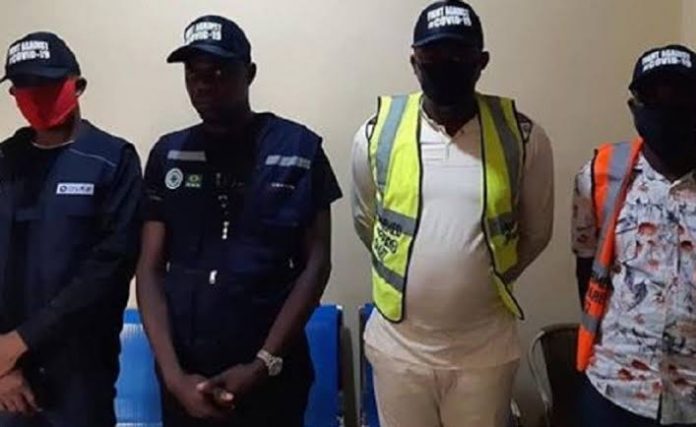 The Anambra Police Command says it has arrested four suspects, who allegedly posed as health officials to sell fake sanitisers and unhygienic face masks to members of the public in Onitsha.

The Police Public Relations Officer of the command, Mr. Haruna Mohammed, disclosed this in a statement on Thursday.

“Suspects, who allegedly claimed to be officials of the state Ministry of Health, fully kitted with reflective jackets and caps with inscriptions “FIGHT AGAINST COVID-19.″

“They were arrested with flyers, hand sanitisers, and face masks which they produced locally under unhygienic conditions and sold to unsuspecting members of the public and other outlets in Onitsha,” he said.

He said that preliminary investigation revealed that the suspects were neither government workers nor health officials as they claimed.

The police spokesperson described the suspects as “misguided elements, who took advantage of the” coronavirus pandemic “to market their unhygienic products to the oblivious buyers.”

He said that exhibits recovered from the suspects included three cartons of hand sanitisers, flyers, several reflective jackets, four caps, and over 50 masks.

According to Mohammed, further investigation will be carried out before the suspects are charged to court.

He reiterated the warning of the state’s Commissioner of Police, Mr John Abang, that members of the public should be wary of such syndicates and refrain from patronising them.