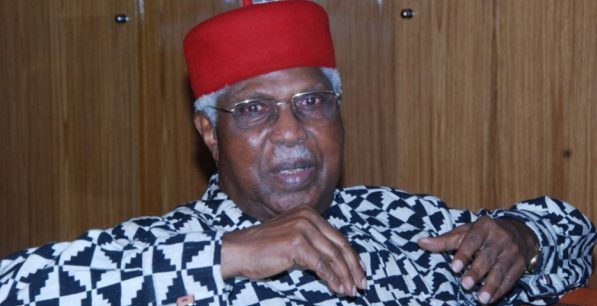 The Anambra State House of Assembly has called on the Federal Government to immortalise Nigeria’s first Vice President, late Dr. Alex Ekwueme as a reward for his service to the country.

The assembly made the call on Wednesday in Awka at the House’ plenary session.

The lawmakers noted that the late Ekwueme, who died on November 19, 2017 at the age of 85, had worked for the unity of the country and deserved lasting honours.

The call was based on a motion on notice moved by the member representing Orumba North State constituency, Chief Romanus Obi.

Obi said that the fallen icon deserved great respect at death considering his selfless service and great contributions towards the development and unity of the Nigerian nation.

“Ekwueme was a unifying factor in the political movement of this country and never hid his wealth of knowledge or used it selflessly.

“The former vice president embraced all tribes and preached unity of the Nigerian nation,” he said.

According to him, Ekwueme belongs to his constituency and related well with the low and high.

The legislator said that the former vice president operated an open door policy where people from all corners of the zones come in to exchange pleasantries and ideas with him at will.

He extolled Ekwueme’s virtues as a great and humble leader who had flare for inspiring people adding that he deserved to be immortalised.

She appealed to the federal government to name the Federal Polytechnic, Oko, after the late sage.

According to him, immortalising him would encourage Nigerians to be good ambassadors.

Mr. Chigbo Enweuzor representing Onitsha North constituency said that Ekwueme’s demise had left a vacuum in the country which would be difficult to replace.

He said that Ekwueme stood for peace, transparency and eschewed corruption.

He prayed God to grant his soul eternal rest and the family the fortitude to bear the loss.

The Speaker, Mrs Rita Maduagwu, also urged the Anambra State Government to name a monument after him.

Maduagwu said that the state had lost a great icon and leader and called on political and non-political leaders in the country to emulate his ways.