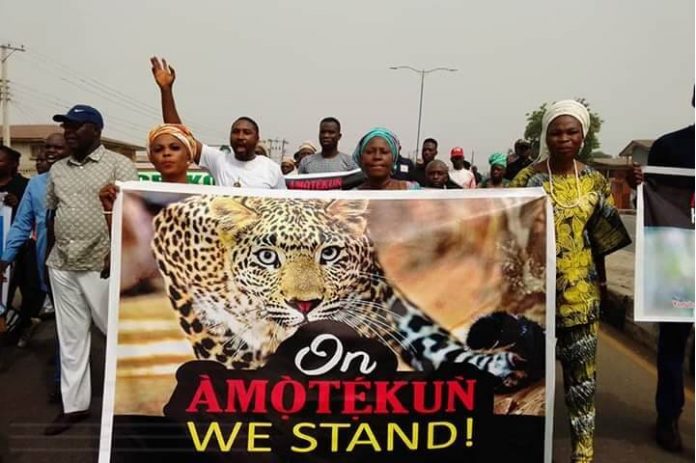 The Attorneys-General after a three-hour meeting in Ibadan, Oyo State capital, on Friday night agreed that each participating states should develop their respective legislations including the mode of operation, while the security outfit would go by the name – Amotekun Corps.

The Nation reports that Seye Oyeleye, Director-General of the Development Agenda for Western Nigeria (DAWN) Commission and his officials were also present at the meeting.

Oyewo, explained that the bills empowering the security network would be dispatched to each State Assembly of the six participating states, after inputs from the State Executive Councils.

He said the content of the bills are similar in terms of operational details and structural procedures to enable easy coordination and integration.

“The meeting of the Attorneys-General of the six south-west states just concluded and we deliberated on the plan to evolve a collaborative security network/agency in the south-west.

“There will be a standard operating procedure that will also be in common and there will be an avenue for collaboration between the states to work together,” the Oyo attorney-general stated.

He noted that that Amotekun Corps would work closely with the Nigerian Police, the military and other security bodies in the country, providing support services.

He also stated that intelligence gathering would be solely sourced from the locals at the grassroots even as he stressed that the ‘security system under the name of Amotekun Corp has come to stay’.

Recall that the Federal Government had originally kicked against the establishment of the regional security outfit by the South West Governors, but later gave its approval with some conditions which it said the governors in the must meet.

Meanwhile, the Attorneys-General have expressed optimism that the bill would get speedy attention from the respective State Assemblies.

“The draft bills will proceed to the state houses of assembly of each of the states and will be signed into law by the governors of each state. That is where we are now.

“Today is Friday (meeting day), by next week it will go to the state houses of assembly after it has passed through the Excos of each of the states.”

Amotekun Corps will bear arms. On the bearing of arms, Oyewo explained that based on the proposed law sent to the states, the Corps would carry weapons.

He said they would also be in uniform, adding that the states do not necessarily require the permission of the Attorney-General of the Federation, Abubarkar Malami, to determine the issue of arms.

His words: “Yes, of course, the carrying of arms is legislated by law and the Amotekun outfit will comply with all the laws of the land. We have an operational manual that will also be passed as part of the legal framework for each of the states.

“We just want to allay the fears of anybody that has fears that this is just part of the ways to impact the security architecture in Nigeria, to protect lives and properties.

“We have been emphasising Section 14 of the Constitution imposes a duty, a primary duty, on the federal, state and local governments to secure lives and properties and that is exactly what the states here present are doing.

“We run a federal system, as long as laws are passed within the competence of our legislation, we don’t need the permission, authority or even the counsel of anybody other than the operators set under the constitution.

“As I have stated and I reiterate, the law is to establish a security network with Amotekun corps and that is what will be presented to the state houses of assembly and that will probably be passed into law,” he added.