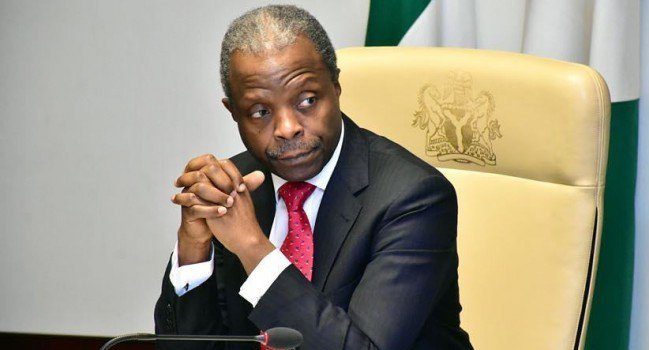 The pan-Yoruba socio-political organisation, Afenifere, has condemned the statement credited to Vice-President Yemi Osinbajo over the spate of kidnapping in the country describing it as ‘opportunistic and provocative.’

In a communiqué issued at the end of its monthly meeting held at the house of its leader, Reuben Fasoranti, in Akure, the group further lambasted Osinbajo, saying he spoke “without much thought for his integrity.”

Recall that the Vice-President was alleged to have told Nigerians in the Diaspora that the stories of kidnapping in the country were exaggerated.

He was also quoted as saying the cases in the South-West were politically-motivated.

The communiqué, which was read by Afenifere’s National Publicity Secretary, Yinka Odumakin, said:

“All the reports provided clear indications of failure of the state as the security forces are largely incapable or unwilling to safeguard the lives of our people against these criminals.

“We are not aware of any of them that has been arrested or is under trial at the moment just as all the Federal Government has done so far is to make excuses for the Boko Haram and Miyetti Allah groups that have been accused of many crimes against Nigerians.

“It is against this backdrop that the meeting was scandalised by the opportunistic and provocative utterances of Vice-President Yemi Osinbajo in New York on Sunday, dismissing the danger we are faced in Yorubaland as well as by other zones in Nigeria as being politically-motivated.”

The group pointed out that Osinbajo’s statement was coming at a time the United States and United Kingdom were issuing travel advice to their citizens to avoid some parts of Nigeria.

The communiqué raised some questions for Osinbajo to address and also offered him some advise: “Is the report of the kidnap of a district head from President Buhari’s town from May 1, 2019 till date politically motivated?

“Was the President speaking of another country when he handed kidnappers on rampage to God?

“Was the former Health Minister, Prof Isaac Adewole, playing politics when it was announced that his son was kidnapped?

“What politics was afoot when the Ondo State Governor recently announced that his convoy was waylaid by kidnappers?

“If he cannot answer these questions, he should kneel before his God and ask for forgiveness for violating ‘thou shall not lie’ commandment.

“We further admonish him not to allow whatever ambition and political interest he serves to push him to make such infuriating comments as the number two man in the country again.”