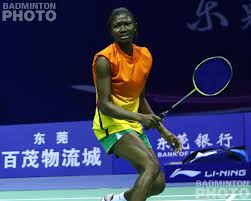 Team Nigeria’s Dorcas Adesokan on Monday lost to Clara Azurmendi of Spain in her opening game in the women’s singles event of the badminton competition at the 2020 Olympic Games.

The 23-year-old will go on to face An Seyoung of South Korea on Tuesday evening at the same venue, according to reports.

This will be in another Group C fixture, which will determine her progress in the competition.

Meanwhile, Nigeria’s pair of Godwin Olofua and Anuoluwapo Opeyori will later in the day return to the same venue.

In continuation of their Group B campaign in the men’s doubles event, they will take on the pair of Kim Astrup and Anders Rasmussen from 6 p.m Tokyo time.

The pair of Olofua and Opeyori had lost their opening group game on Saturday against Team Japan.(NAN)