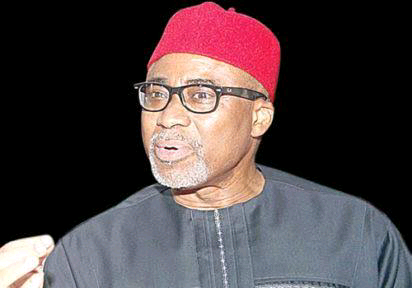 Mr. Mkpa Uka, a chieftain of the Peoples Democratic Party in Abia, says the 2023 governorship ambition of Sen. Enyinnaya Abaribe is a huge joke as it is the turn of Abia North to produce the next governor.

Speaking with journalists in Umuahia on Thursday, Uka took strong exception to Abaribe’s expession of interest to contest the governorship seat in 2023.

He described Abaribe’s ambition as unexpected.

Abaribe had during a visit to Gov. Okezie Ikpeazu announced his ambition to join the 2023 governorship race in the state.

Uka faulted Abaribe’s pronouncement, saying he did not expect him, a former Deputy Governor, who hailed from the same area with Ikpeazu to do so.

Although he admitted that the lawmaker, representing Abia South, was free to harbour any ambition, he insisted that 2023 governorship slot should be the exclusive preserve of Abia North.

“Any attempt to disrupt the process and smooth power shift arrangement by senatorial districts will cause confusion as well as serious political tension and acrimony in our dear state.

“I’m not saying there are no qualified persons from Abia south and central but it will be absurd for somebody from Abia south to desire to succeed his brother from the same Obingwa.

“I did not expect Abaribe to say that. It is indeed a huge joke.

“If he has declared to run for the President of Nigeria, we will all roll up our sleeves to support him because he is eminently qualified to be president,” Uka said.

He further dismissed the argument in some quarters that power should rotate between Old Aba and Old Bende Divisions.

According to him, the argument lacks merit because it is neither constitutional nor in consonance with the dictates of the Abia Charter of Equity.

He said the 1999 Constitution provided for rotation of power among the senatorial districts in all the states of the federation.

“It sounds illogical that a man that is agitating for power shift from the north to south at the national level would come home to demand a different thing,” Uka said, citing Abaribe’s governorship ambition.

He tipped Dep. Gov. Ude Oko-Chukwu from Abia North to succeed Ikpeazu, saying he is a tested, trusted and proven man of integrity.

“He has what it takes to fix Abia and is acceptable to all sections of the state.

“He is humble, calm, intelligent and experienced, having been a lawmaker, Speaker of the Assembly and two-term deputy governor,” he said.

He said that Abia had lagged behind in the South-East in terms of physical infrastructure and human capital development.

“Abia is work in progress so we all must contribute our own efforts to build the state,” he said.

He urged the National Assembly (NASS) to take measures to convince the president to give his assent, given the numerous benefits of the bill to the country.

He said it would strenghten and confer credibility to the nation’s electoral system, when signed into law.
He also said it would help to restore the confidence of Nigerians in the electoral process and eliminate voter apathy during elections.

Uka further contended that a credible electoral process would help to deal with the imposition of candidates and god-father syndrome.

He described god-fatherism as antithetic to democracy and urged governors to learn to deal with the negative tendencies of their god-fathers.

He opined that governors had a choice to either remain tied to the whims of their god-fathers and not perform or stand on their feet to deliver on their electoral promises to the masses.

Uka advocated the use of direct primaries in choosing party candidates, saying the process would help to ensure that only popular candidates emerged for elections.

He said that indirect primaries encourage the hand-picking and imposition of candidates by a few power brokers to the detriment of more popular choices.

He advised governments at all levels to provide jobs and economic empowerment for the teeming unemployed youths to check political thuggery and vote buying during elections.

“If our youths are engaged in productive ventures and the electorate are economically self-reliant, they would not lend themselves to political thuggery and vote selling,” he said.

Uka, a philantropist, who is the founder of Mkpa Foundation, said the organisation was collaborating with foreign partners to launch a scholarship scheme for indigent students.

He said the foundation was founded about six years ago to help the less-privileged, vulnerable persons and communities in Abia to enjoy decent living. (NAN)